Mens Bikini Briefs: Jon Bernthal Underwear. Did you ever dream of seeing Jon Bernthal dancing in a pair of mens bikini briefs underwear? Well, consider your dream fulfilled because we have photos for you.

Where did these come from? Well, first of all, thank us in the comments for fulfilling your dream. And then, you might want to check out Jon’s 2008 movie, Bar Starz, because these images are from said movie. Furthermore, you also got to thank Oh No They Didn’t. Why? Since they gave us the info on Jon’s mens bikini briefs dance routine. [Want more male celebrity underwear?] 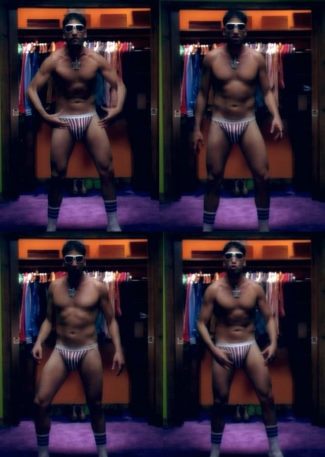 Would you want to watch Bar Starz? An ONTD reviewer gave it a thumbs down because it is bad. But s/he also gave it a thumbs up because it is a so-bad-its-good kind of movie. Says the reviewer,”It is a horrible, horrible movie. Just fast forward to all of Jon’s parts. That’s what I do. When all you watch is Jon Bernthal it’s a solidly C- film. Highly quotable, too.”

So who wants to watch the movie with us? Here’s the synopsis for the movie for those who do (via IMDB):

Emancipating himself from his crazy girlfriend, Barry Shlotzak is in need of a new start, new challenges, and a new life. Hes about to find it when his best friend, Douglas, convinces him to enter a contest, with the Grand Prize being an internship with the local Bar Starz. Everyone knows the Bars Starz, they are the guys who set the trends, get the girls, and personify coolness.

The local Starz, led by Donnie Pintron, test Barry and his fellow contestants on the maxims of nightclub etiquette. In order to make the cut, the contestants must gain entrance into the most exclusive clubs, dress to perfection, and pick up the hottest chicks. Comedy ensues in this wacky world of nightclub denizens.

One thing we should be excited about as Jon fans is his casting as Frank Castle in the Daredevil spinoff, The Punisher. Some especially relevant details from marvel.com:

Bernthal will portray The Punisher, one of Marvel’s most popular characters. He is a vigilante who aims to clean up New York City’s Hell’s Kitchen by any means necessary, no matter how lethal the results.

“Jon Bernthal brings an unmatched intensity to every role he takes on, with a potent blend of power, motivation and vulnerability that will connect with audiences,” said Jeph Loeb, Marvel’s Head of Television. “Castle’s appearance will bring dramatic changes to the world of Matt Murdock and nothing will be the same.”

Finally, let’s end this post with a Jon Bernthal shirtless photo for those of you who want to erase your mental image of his mens bikini briefs. 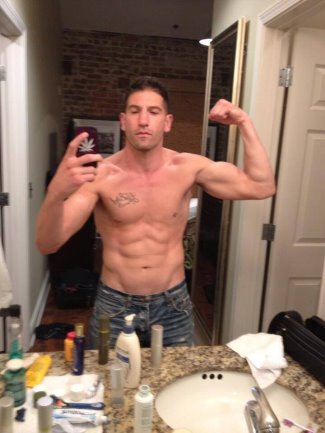 Better yet, here’s our Jon oozing with sax appeal in the next photo below. Did his tight shirt and tight pants get you hot and bothered? Hehehe. 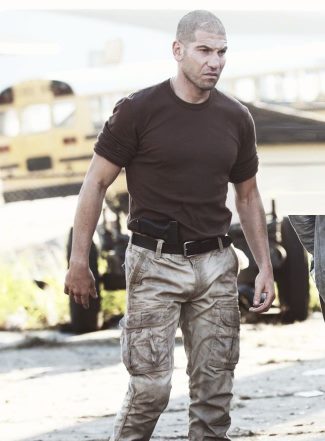 Update: In a recent interview with deadline.com, Jon gives us an update on his upcoming The Punisher project. He says:

I’m tremendously excited about it. I look at it as a real joy and a real responsibility and a real honor to play Frank Castle. I feel like he’s in my bones now and he’s in my heart. I’m ready to keep going with him. As far as what this show’s going to be, and what it’s going to be about, and when it’s going to shoot, and where it’s going to shoot and all that, unfortunately I don’t know anything. It’s kind of part and parcel with the way that Marvel works. Information is definitely on a need to know basis. I am nervous, and I just want to do this character and this world justice.

So that’s it for now, fellow Famewatchers.