Men Wearing Panties. What do you think of the photo below? Do you think it’s cool? Or are you creeped-out by the idea of men wearing panties and bras? We here at Famewatcher are live-and-let-live kind of gals so we are cool with guys wearing women’s underwear. If they can rock it, more power to them.

Anyhoo, we found out that the pic is actually an advertising campaign for women’s pads and napkins by a British company called Dr. Whites. 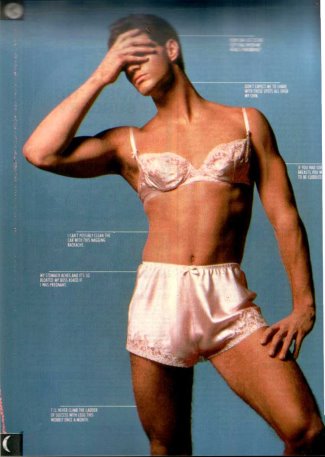 Here’s the text of the advert:

Have you ever wondered how men would carry on if they had periods?

At the risk of sounding sexist we must observe that men can be terrible babies when they’re ill. A cold so easily becomes ‘flu’. A headache ‘migraine’. Indigestion, a ‘suspected heart attack’.

If men had periods, the cry would go up for the 3-week month, never mind the 5-day week.

And far from carrying on, women are busy, for the most part, soldiering on.

We like to think we’re some help. As the chart shows, there are ‘Dr. Whites’ products designed to make your life a bit more bearable, whatever kind of periods you have to put up with. And whatever your personal preferences might be.

Unlike most other sanitary protection, we have no ax to grind in the tampons vs. towels war: we make them both. And we make both exceptionally well.

Dr. White’s contour tampons have rounded end applicators, so insertion doesn’t make you catch your breath or anything.

Dr. White’s panty pads have a unique Tendasoft cover to keep you drier and more comfortable.

And Dr. White’s Maxi press-on has two widely-spaced adhesive strips running the length of the towel so it stays securely put whether you’re climbing the mountain or, indeed, the ladder of success.

After 104 years in the business, we aren’t naive enough to imagine we could make your period a [undreadable] of laughs, exactly.

But we’re certain we can make it less of a (dare we say it) bl**dy nuisance.

Now, ain’t that a cool advertisement? We wonder if Dr. White’s market share for the men wearing panties demo increased because of this. Surely it attracted a lot of press back in the 1980s.

Is Dr. White’s still up and running in 2014? It looks like it still exists but it may no longer be making products to help make women’s periods more comfortable. But, based on Google search returns, it looks like the company is producing sanitary towels (Dr. White’s Looped Towels), Dr. White’s maternity pads, and Dr. White’s luxury belt.

If you can explain what a luxury belt is supposed to be, we’d be very very thankful.