Mel Gibson Bald Update (2017). We are updating this post because some of you are wondering whether Mel ever had a hair transplant. Looks like he may have based on the photos below. 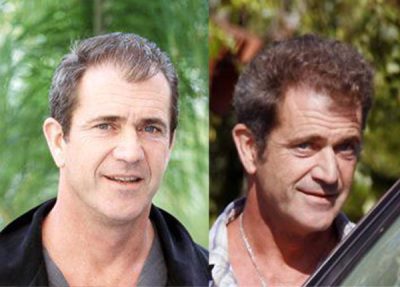 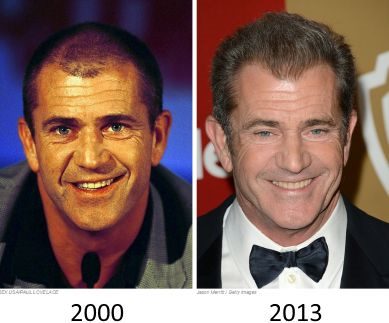 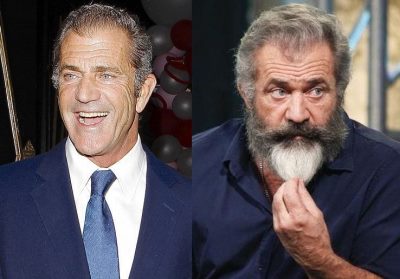 Mel Gibson Bald Update: Hair Loss Linked to Violent Behavior? (posted 29 April 2011). Gawker has an interesting story about how a hair loss expert diagnosed Gibson’s infamous outburst back in 2006 when he was caught driving under the influence and then taped making racist remarks as a behavior “typical of a male client who is starting to lose his hair.”

Mel Gibson before and after hair loss. We’d get angry too if we lose a head full of gorgeous hair. Hehe. 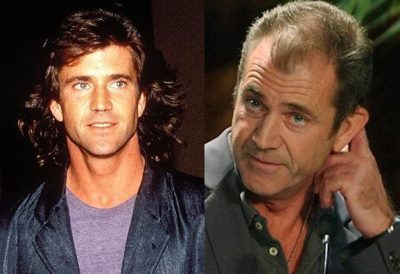 Here’s the media release on the attempt by this so-called expert to link Mel’s crazy behavior to his loss of hair:

Mel Gibson —he’s handsome, successful and according to hair loss expert Leo Benjamin, Jr., the actor’s recent verbal outburst is “typical of a male client who is starting to lose his hair.”

According to Benjamin, Gibson’s in denial about his hair loss. “He’s angry at the world. He feels cheated and looks older than he really is. Mel looks in the mirror and it’s not the same person he is use to seeing.We see this all the time.”

We are no hair loss experts ourselves so we have no way of verifying this expert’s “diagnosis”. In other words, we can’t give Leo Benjamin a peer review or something. However, we gotta give him props for using the Mel Gibson outburst as an opportunity to promote his business. Well played, Mr. Leo, well played.

Anyhoo Famewatchers, what do you think of the above “diagnosis”? Do you think hair loss will make you go drunk-driving (as Mel did) and make you burst out racist and anti-Semitic remarks (as Mel also did)? If so, do you think a balding man can use a “hair-loss syndrome defense” strategy that can get him off the hook when he’s in court for criminal behavior? You know, something like: “My hair loss made me beat my wife, or kick the dog, or shoot the neighbor.”

If Leo Benjamin aka the hair expert’s “diagnosis” of Mel Gibson is true, that just might happen, no?

Mel Gibson Bald — Not Completely — But Still Shaggable (posted 21 August 2009). Mel Gibson may have lost some of his hair but he sure hasn’t lost having his way with the ladies. He’s now playing beautiful music with a new girlfriend named Oksana Grigorieva. 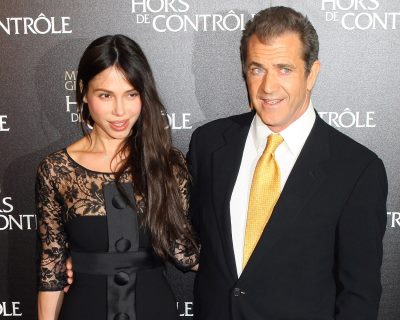