Here’s Kelly in her cheerleading outfit. 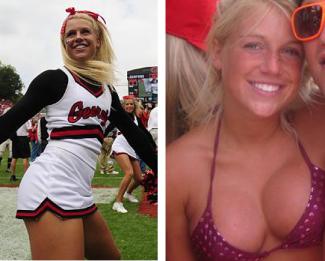 Speaking of football girlfriends, did you know that Chicago Bears quarterback Jay Cutler is dating blogger Julia Allison? Here’s an earlier post we wrote about the two:

Jay Cutler Girlfriend: Julia Allison, Blogger?. It’s not confirmed yet whether blogger/internet celebrity/journalist Julia Allison is the girlfriend of new Chicago Bears quarterback Jay Cutler but the two have been spotted at Club Sub51 in Chicago. 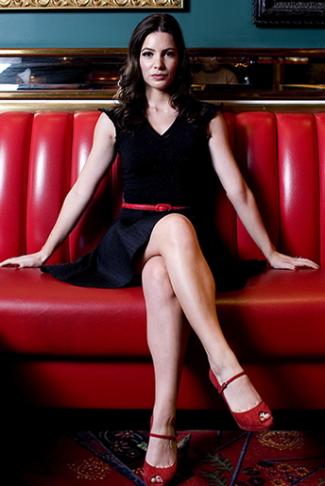 Says a spy who saw them: “He was sitting in a banquette and she was standing between his thighs, touching them and facing him.”

What? She’s just touching his thighs? What a missed opportunity, Julia! Next time you should grab his ball. 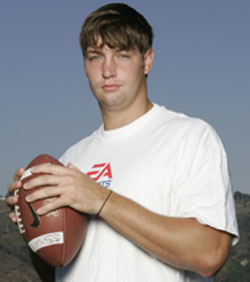 For another football girlfriend, check out Mark Sanchez and Hilary Rhoda.

A year after we wrote the above post, Matthew and Kelly continue to rock each other’s boat. Here’s the NFL quarterback with his girl during some boat party. 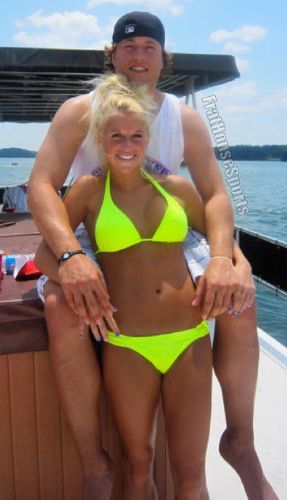 Man, that must be the brightest bikini swimsuit we’ve ever seen. Maybe it’s Matt and Kelly’s strategy to ward off the evil eye because you can’t stare at them two-piece without getting blinded by its neon brightness. Haha.