Martin Kristen Heidi Klum: Her Bodyguard is Her Lover? Who is Heidi Klum’s bodyguard and why is her ex talking about him? Well, her bodyguard is the hunky dude with her above. His name is Martin Kristen and, if Heidi’s ex-husband Seal is to be believed, he was banging her boss even while she was not yet separated to the British singer. 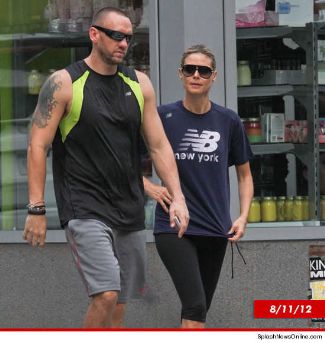 Here’s what Seal alleges about the Project Runway host and her bodyguard: “Whilst I didn’t expect anything better from him, I would of thought that Heidi would have shown a little more class and at least waited until we separated first before deciding to fornicate with the help.” Seal adds, “But I guess you all now have the answer you have been looking for for the last seven months.”

“Fornicate with the help”? Strong fighting words, no? Does this mean that Heidi’s the one to blame for their divorce?

Wait, there’s more dish from Seal about Heidi’s extra-marital fornication: “I certainly don’t expect Heidi to all of a sudden become a nun, but as always my main priority is the emotional well-being of my children, and to be quite honest if there is going to be someone else there in their lives, I would much rather it was a familiar face.”

Fun Hollywood gossip which may or may not be true: It’s been rumored that Seal has one of the biggest you-know-whats in Hollywood. His photos in an earlier post we wrote about Swimsuits for Older Men kinda indicate that there is some truth to the rumor.

Before we go all-judgmental on Heidi let’s first have her side of the story, shall we? TMZ, which broke the story about Seal’s allegations, reports that a close friend of the German supermodel told the gossip site that she denies banging the “help” while still married to Seal.

From TMZ: “Heidi told one close friend today her relationship with the bodyguard was “strictly professional” while she was with Seal. The friends tell us that since the split, Heidi says she has gotten “very close” to the bodyguard … who has helped her through the difficulties of ending a marriage. As for the nature of their relationship now … all the friend would say is it’s ‘undefined’.”

So there! Who between Heidi and Seal do you find more believable? We are totally undecided on this one but if we are going to commit the sin of fornicating with someone, we’d do it with a guy like Martin Kristen to make the sin worth it. Haha. Let’s check out Martin Kristen and Heidi Klum going for a run. 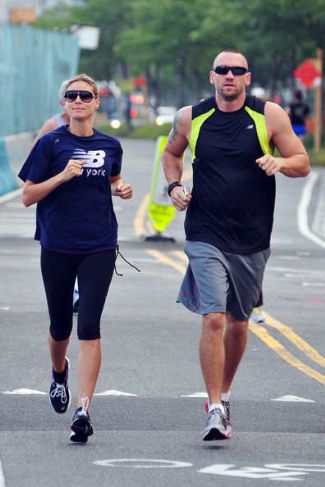 Seriously, he’s all man isn’t he? Heck, just looking at him running in those loose shorts makes us think dirty thoughts about him. Hehe.