Mark Wright Update: Ten Years Later. So, what’s Mark Wright been doing ever since we blogged about him a decade ago having his pants pulled down by his pal Jack Tweed? Apparently, he is now a presenter for the evening show of Heart Radio. Oh, he also got hitched to actress Michelle Keegan in 2015. Here are pics from their wedding day which, because the two are both famous, naturally made it to the Hello Magazine cover page: 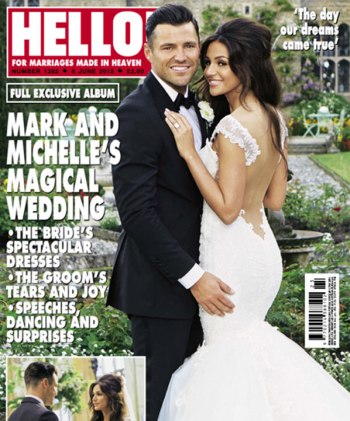 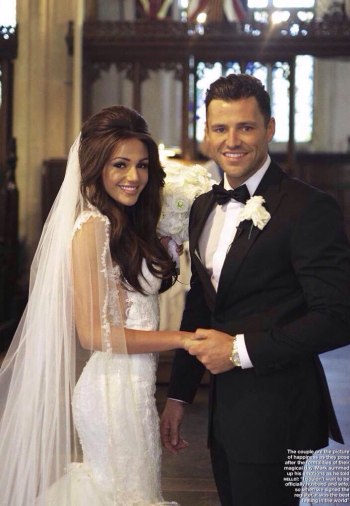 From TOWIE, our British cutie went on to star in our TV reality shows. For instance, he was a cast in the 2011 edition of I’m A Celebrity Get Me Out Of Here — presented by our favorite TV duo Ant and Dec — and ended up as the runner-up to Dougie Poynter. He also danced his booty in Strictly Come Dancing and made it all the way to 4th place. You gotta give it to the guy, he sure has the tools to become a multi-talented entertainer. 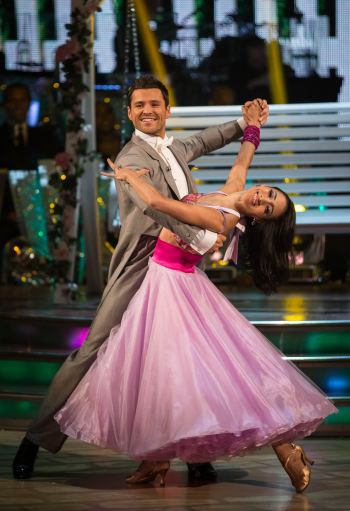 Apparently, he was also a correspondent for Billy Bush’s show on Extra. In fact, he’s done a tons of presenting gigs in shows such as Good Morning Britain, Lorraine, and Loose Women. 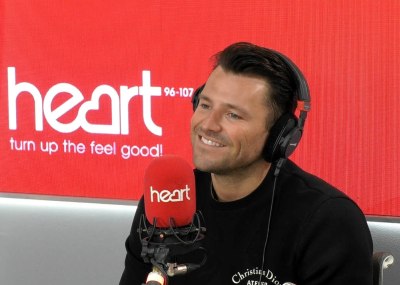 Oh, did you know that he used to play football/soccer professionally before he became a reality TV star? He did not make it to the big leagues but he sure can easily outscore you in the field. His brother, the guy next to him in the pool below, is also a pro soccer player. 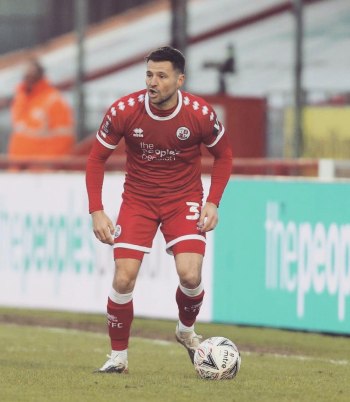 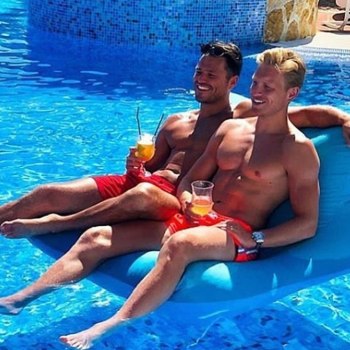 We are not gonna do an update without including these photos of Mark in white Speedo swimsuit. 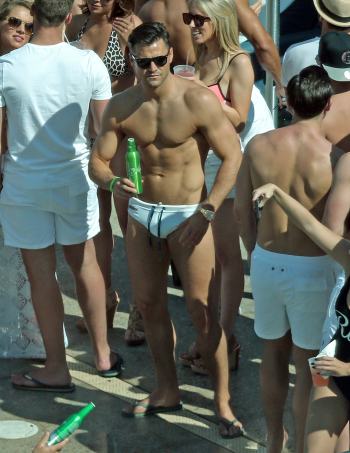 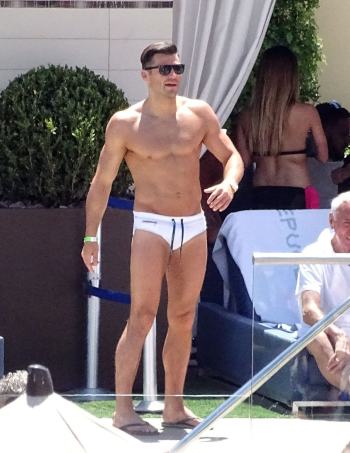 Now, how’s Mark and his pal Jack Tweed doing these days? Apparently, according to Michelle Keegan in an interview with heart.co.uk, the two are still very good friends. She says, “He’s friends with Jack, he was friends with Jack for a long time before we got together. They still speak now, Jack still comes to family parties, he’s really nice, he’s a really lovely guy.”

Mark also posted a photo of him, Jack, and other pals vacationing in Majorca. It’s not the one below, we’re just including the photo because they look good together. Hehe. 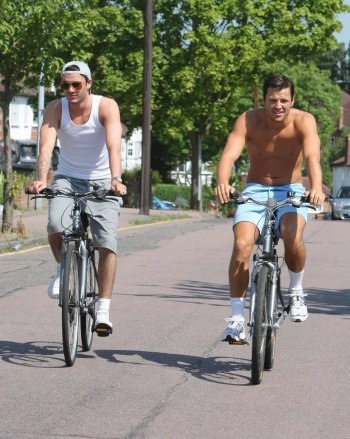 …..
More Mark Wright Underwear and Shirtless Photos (23 September 2011). What is it with Mark Wright that he keeps “regaling” his fans with his underwear pics. We’re not complaining at all. Truth be told, we’re more than happy to see him walking around in Y-Front briefs underwear. We’re just wondering whether he signed a pact with God (or the devil) that requires him to display his underpants in public. Or maybe he’s one of those “if you’ve got it, flaunt it” kind of guy? 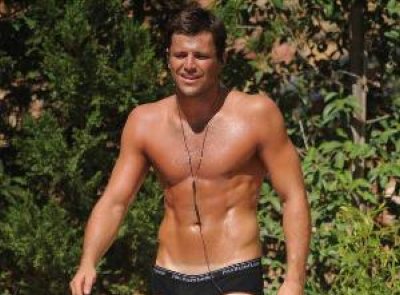 But hey Mark, if you really want to flaunt “it”, what about wearing a white Y-Front undies instead of the black one you’re wearing above. As we mentioned elsewhere in this blog, white underwear is more revealing than black ones which tend to de-emphasize the aubergine.

…..
Mark Wright Underwear and Shirtless Photos (25 February 2011). We are sooo falling in love to Mark Wright right now. Remember him? He’s the TOWIE star who stripped for Cosmo Magazine’s Everyman male cancer awareness campaign. As we said, we’re soooo falling in love with him so we went googling for more pics of the guy and we came across these fun photos of our imaginary beau with Jack Tweed. Remember Jack Tweed? He is Jade Goody’s widower who apparently loves to wear women’s underthings. [See Jack Tweed’s womens underwear] 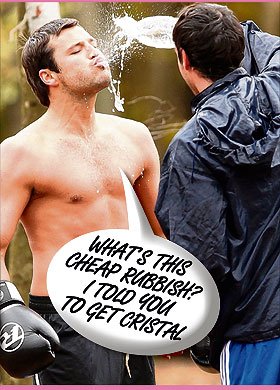 Anyhoo, ain’t these two guys cute? This “I’ll pull your pants down” going on here makes us wonder what these two do behind closed doors. Hehehe. 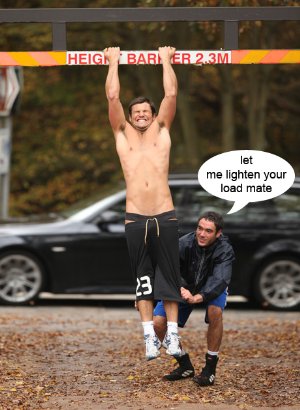 …..
Mark Wright Strips for Cosmo’s Male Cancer Awareness Campaign (06 February 2011) Let’s add Kiwi hunk Mark Wright, star of the show The Only Way Is Essex to our list of famous men who stripped for Cosmopolitan Magazine’s male cancer awareness campaign. He’s in good company for sure. Other male celebrities who dropped their trousers to encourage men to get themselves checked for cancer include the likes of rugby player Gavin Henson, MMA fighter Alex Reid, and Harlequin star Danny Care. [Update: Apparently, the original photo we included in this post was to saucy for our Grandma Akita so we replaced it with the one below; this one is still from Cosmo but it is totally not the one he posed for in the magazine’s male cancer awareness campaign .] 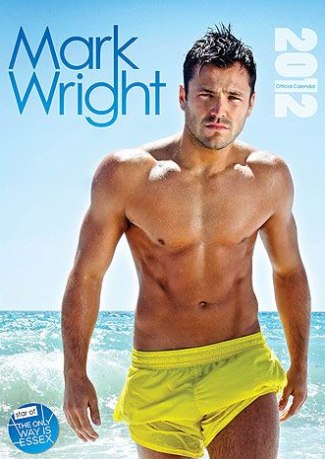 Mark Wright Gay or Straight? Is he dancing the horizontal dance with Jack Tweed? Nah. They are just BFFs who spend time together while doing sporty stuff.