Marcell Jansen Underwear. Who wants to see Marcell Jansen’s underwear & shirtless pics, raise your hand? Oh, all of you! We are so not surprised. Unfortunately our 26-year-old German hunk has not reached that point where he’s modeling sexy men’s underwear a-la David Beckham, Cristiano Ronaldo, and other famous sportsmen who are more than willing to strip for the camera for a humongous fee. Fortunately, we still have this shirtless photo of him showing his gorgeous washboard abs. Yay!

Oh wait, we came across this photo of Jansen wearing a pair of white boxer shorts. Yay, again! 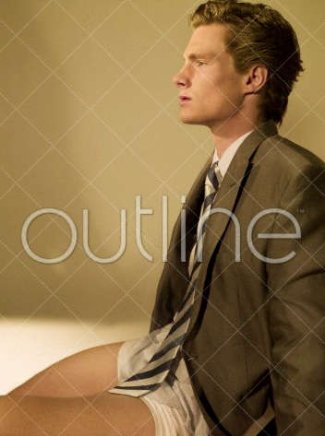 But wait, there’s more! Here’s another Marcell Jansen underwear pic: Jansen in bed in his boxer shorts. Triple Yay! Yay! Yay! Who among you Famewatchers would like to jump in bed with this guy? All of you? Can’t say we’re surprised. [Update: Sorry, we had to delete the photo.]

But that’s a very little bed for the two of you. You need a bigger bed because you have to have some room for Marcell’s big dogs. 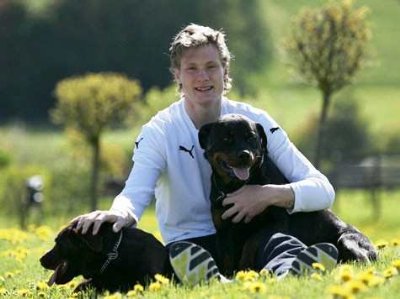 Awww. Them dog are lucky bastards.

Marcell Jansen’s Girlfriends. Does Marcell Jansen have a girlfriend? Hmmm, why are you asking? Hehehe. According to famoushookups.com, our versatile football player is “currently single”. However, he has dated two girls in the past namely Monica Ivancan and Julia Godicke. Why they broke up and what became of their relationship with our football hunk, we don’t know and we don’t care enough to know. Hehehe. But we care enough of Marcell’s boyish cuteness to post this photo of him looking fab in his suit and tie.

Hmm, this photo reminds us of Benedict Cumberbatch, the English actor who’s slowly becoming famous in the United States because of his role as Sherlock Holmes. [See more of Benedict in the following post: Benedict Cumberbatch Underwear and the Gay Question.] There’s a resemblance between Marcell and Benedict, right? Please tell us we’re not imagining things. Haha.

For another German football player who resembles an actor, check out our post on Kevin Volland’s Underwear. That Kevin dude has an uncanny resemblance to Zac Efron.