Is Manu Bennett Gay or Straight? He is straight and in a relationship with girlfriend Karin Horen but he ain’t afraid of getting intimate with a dude as he does in these photos with Spartacus co-star Liam Mcintyre. 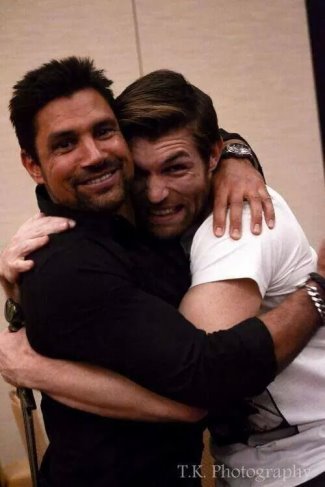 How cute are these two? At the premiere of Spartacus: Vengeance in Hollywood. We’re pretty sure these images are what prompted the the denizens of gay-or-straight.com to rate Manu as a “highly gay” dude. 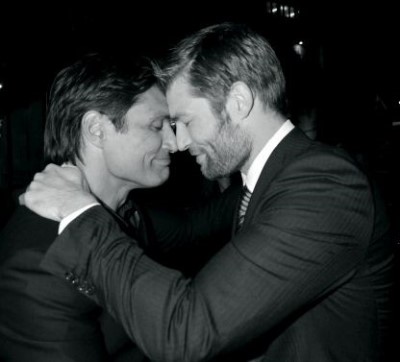 Anyhoo, Manu Bennett got in trouble at Comic Con last year because he hit a man who insulted Manu’s girlfriend and baby mama. The Daily Mail has the details:

It was reported by The Newcastle Herald that the the man allegedly attacked by Manu had made remarks about Karin Horen, the mother of the actor’s three children, and her battle with cancer.

Underbelly actor Matt Nable claimed to have witnessed the incident, telling the Herald that ‘[Bennett] was very, very offended about what the man had said to him.’

‘What he did was out of character but he was obviously very offended by it,’ added Matt, referring to the alleged insult thrown at Manu before the altercation.

If we are men and someone insulted our woman, we’d do the same thing that Manu did too. In fact, we admire him even more for defending his girlfriend.