Luke Cassidy American Male Model in Gym Shorts. Famewatchers, meet American male model and actor Luke Cassidy. He’s kinda cute, isn’t he? He’s got a nice warm smile that can easily melt the ice in the polar regions. He’s got great a washboard sixpack which rivals Aaron Schock’s abs. And he looks awesome in them tight sexy shorts which is so begging to be dragged down by us.

Luke Cassidy, for those of you who are not familiar with his work is an actor/performer who appears in movies for men who like to do it with other men. 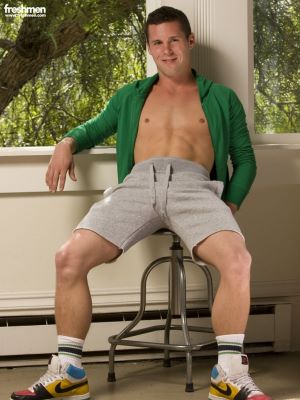 Okay, here’s a picture of our Luke with Argentine model/actor Max Schutler. It’s from a movie called Flip Flop Buddies where the two, presumably, did a lot of flip-flopping. 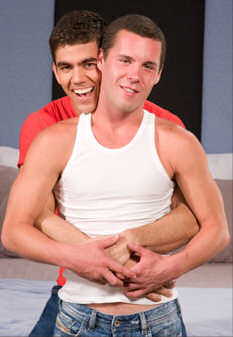 By the by, didn’t we tell you that white athletic shirts or wifebeaters as some of you call it are sexy on a man? Well, our Luke here is a fine example of a man who rocks his athletic shirt. We think he’s wearing his wifebeater in the following photos courtesy of Freshman Magazine. 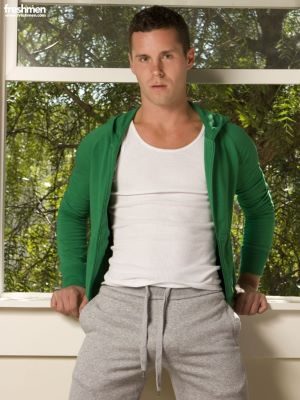 For the vital statistics nerds among us Famewatchers, Luke stands at 5’8″ (which makes him taller than Tom Cruise who is speculated to be only 5’7″ tall) and weighs 140 lbs. His hair is brown (duh, you know that already, didn’t you?) and he is 26 years old (at the time of writing).

According to his AVN profile, Luke starred in nine movies including an American football-oriented film called “Tackle”. Here’s our Luke as a footballer.

Do you think he can actually tackle one of the National Football League’s superstars, New England Patriots quarterback Tom Brady? Who would win between Tom and Luke when it comes to tackling? And, who looks better in his tighty whitie underwear? Okay, you have to check out Tom Brady’s underwear first. Now, here’s Luke in his white briefs.

Before we end this post, here’s a question for you: Would you agree that if Ben Affleck and Adam Sandler made love and they, somehow miraculously, produced a son, their offspring would by Luke Cassidy? 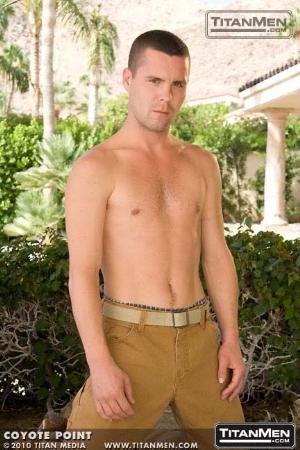