Luis Suarez Shirtless and Underwear Photos. Ugh, its very likely that the England national football team’s gonna be eliminated soon thanks to the ball-kicking goodness of Uruguay’s Luis Suarez who outscored the whole English team in the England vs. Uruguay match two days ago. Bad for these shirtless English footballers but vewwy vewwy good for their Uruguay rivals.

This, of course, gives us an excuse to blog about the shirtlessness of Luis Suarez because why not. Hehe. Here’s our Latino hunk with no shirt. 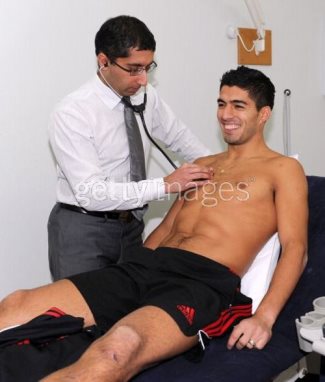 You know a man is hawt as hell when he makes girls tingle with his body-fit shirt. Haha. 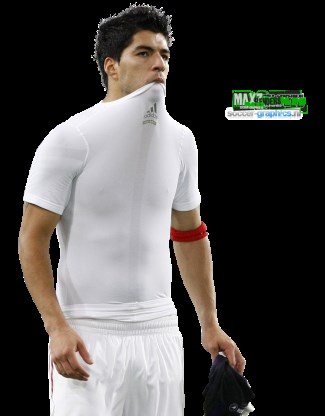 Unfortunately, we can’t find an underwear photo for our handsome forward. But we do have a waistband “peekabo” underwear shot like this one: 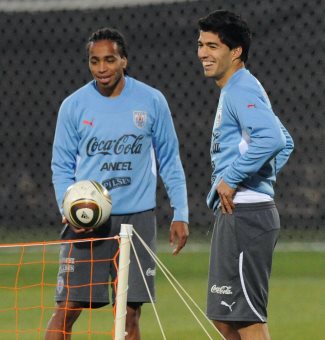 You know what, those underwear brands are missing a pretty good opportunity if they are not gonna hire our 27-year-old hunk to front one of their advertising campaigns. What gives Calvin Klein and Emporio Armani? Forget about Cristiano and Beckham and hire this guy to pose for your boxer briefs. Luis’ World Cup heroics makes him a media magnet not only in his country but around the world.

And he’s a consistent ball player too. In fact, The Guardian ranks at at #9 in its list of the world’s top 100 footballers for 2013 outranking the likes of Famewatcher favorite Cesc Fabregas and Germany’s Thomas Muller. He, however, is outranked by another Famewatcher fav, the joy-to-watch Brazilian cutie that is Neymar (see: Neymar’s Underwear Photos). Anyhoo, here’s what The Guardian says about Suarez’s #9 best footballer in the world ranking:

Amid the furore over his biting of Branislav Ivanovic, the 10-match ban that followed and the summer transfer saga, the thing that still stood out this year was the Uruguayan’s remarkable football talent. It is easy to forget now that under Kenny Dalglish he missed more chances than he took whereas in the past two seasons – and certainly since his ban – he has been lethal. His goal-per-game ratio against the best Premier League clubs can still improve but if he really is a reformed character there is no reason why he cannot continue to improve and join Lionel Messi and Cristiano Ronaldo as the best players in the world.

Do you agree with The Guardian’s ranking of Luis Suarez as well as their assessment of his footballing abilities? Sound out in the comments.