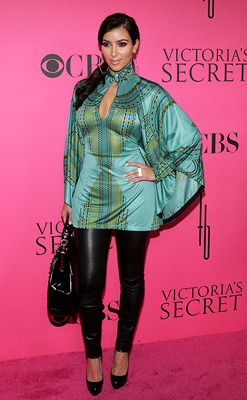 Compared to the previous Kim Kardashian’s legging pants which we blogged about last October, the trendy reality star looks way much better in this liquid leggings which she pairs beautifully with an Egyptian/African-inspired top. If Simon Cowell is judging her outfit, we’re pretty sure he’s gonna say, “That’s an inspired, beautiful outfit.”

Would you agree with our imaginary Simon? What do you think of Kim K and her liquid wet look leggings? 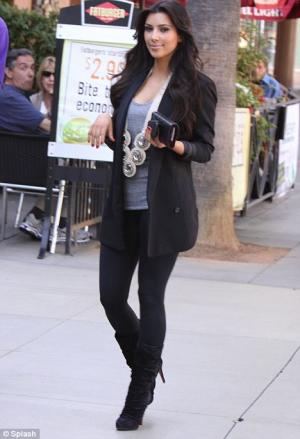 You may accuse Kim Kardashian of being famous for nothing but you cannot accuse her of not knowing what clothes to wear. The girl sure knows her style. This is not surprising of course since Kim, after all, used to be the stylist for some celebrities who are famous for nothing (hello, Paris Hilton) before she became a celeb herself.

Anyways, Kim’s got nice and sexy leggings, doesn’t she? Now, how would you compare her outfit with Victoria Beckham’s leather leggings? And who between the two ladies has a bigger chance of becoming a fashion icon? 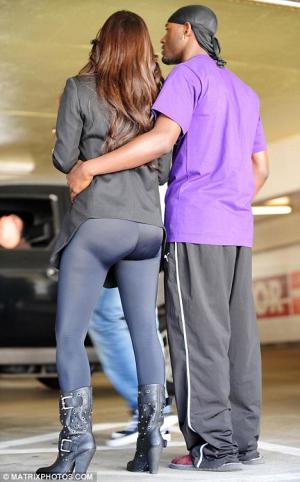 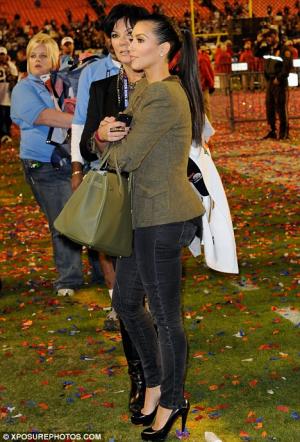 Reality star Kim Kardashian is in tight-fitting pants when she went to cheer for boyfriend Reggie Bush at the Superbowl. You know, of course, that the New Orleans Saints won (hello Drew Brees!) so let’s say Yay for Reggie and his lady love.

What do you think of Kim’s outfit? We’re going to say that its appropriate for the occasion but we hope she doesn’t wear high heels every time we see her. What’s wrong with high heels, you ask? Well, as Victoria Beckham painfully discovered, them high heels will give you bunions. 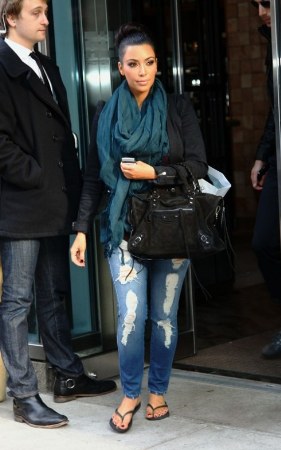 Of course you want to see more of Kim Kardashian’s fashion style, don’t you? So let’s check out her Siwy Hannah Jeans. What do you think of Kim’s jeans? Are they skinny and tight enough for you? Or are you wondering about what Siwy jeans is all about and why you’ve probably never heard of it, yet?

Well, Siwy jeans is a fairly new denim wear. According to Denim Wiki, it was only established in 2005 but it has apparently already built a cult following with the likes of Kim K, Kate Moss, Sienna Miller, Nicole Richie, Selma Blair lovin’ and wearin’ its denim outfits. It must be doing something right to have such a following, no? 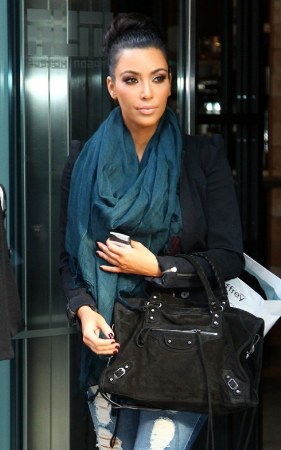 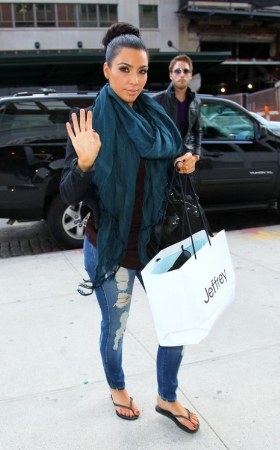 Anyhoo, for more Kim K outfits, check out her cocktail dress as well as Kim’s bikini swimsuit. The girl sure knows what to wear, doesn’t she?