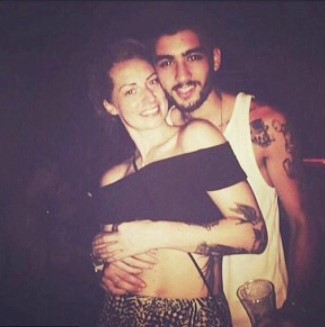 Lauren Richardson Zayn Malik Cuddler: Who is Lauren Richardson and why are we blogging about her? Well, she is Zayn Malik’s “Thailand Girl” who is apparently now being blamed by silly One Direction fans as the reason why Zayn left the British boyband. Unfair, huh? Anyhoo, here’s Zayn and Lauren canoodling in Thailand.

Aside from being Zayn’s huggy-buddy, is now a bonafide TV star because she’s been cast in a reality show called Love Island.

According to wikipedia, the show features twelve single celebrities who spend weeks on an island whereby viewers will vote for a couple to spend time on a “love shack” where the two would get to know one another better.

When the couple get to “know” one another, are we using “know” in the biblical sense? And will the viewers be seeing videos of their chosen couple “knowing” each other?

Anyhoo, before she went to the Island, Lauren did an interview with the Daily Mail where she clarified what happened between him and Zayn. According to her, they just took a photo together and that nothing really happened. Here’s what she said:

On meeting Zayn in Thailand:
It just got blown out of proportion. The picture was just a picture.

I went into the nightclub where he was, not knowing he was in there. I went in there because it was a free bar for three hours. So that was the reason I was in there.

They were in the VIP section and I managed to get in there. I even told my friends I didn’t know how I got in there because I looked like an absolute tramp. Wearing a pair of shorts worth three pounds from Dagenham market, hair scruffed up in a bun, no makeup on and we, the people that I was with, went over.

We were dancing up in the VIP bit and I went over to ask for a picture. There was no problem and I took the picture. I then posted my picture and it just went absolutely mental. So there’s no juicy story behind it which I think everyone was dying to hear. It’s just a picture.

On the backlash from One Direction fans:
It was really intense because when I put the picture up they just kind of shouted out “We hate you” and “You should die, you’re a home wrecker”. They would put up pictures of gun faces and say “Share you’re location, we want to see you. We’re going to hunt you down”

It was quite extreme at the time and my friend’s was like turn off the notifications, it’s the best way to try and ignore it. But every picture I put up it was just hate on me.

Those fans sure could be cuckoo sometimes, no? We hope they stop this shit blaming other people for the things that their idols do.

Anyhoo, we think it ended well for Lauren because the Zayn Malik “affair” landed her a gig as a reality star.