Lauren Morelli Samira Wiley Dating. Let’s add writer Lauren Morelli and actress Samila Wiley to our list of Hollywood lesbian celebrities. Apparently, Orange is the New Black, the show for which Lauren is head writer made her realize she’s a lesbian.

She is now dating OITNB actress Samira Wiley (she plays Poussey in the hit show) and has filed for divorce from husband Steve Basilone.

One on of the head writers for “Orange is the New Black” has filed for divorce … the logical step since she’s now realized she’s a lesbian and is dating one of the female stars.

The story is amazing. Lauren began writing for OITNB 5 months after she got hitched. Lauren says as she started writing for the main character — who had once been in a lesbian relationship — she saw herself in the character. Lauren says she began to feel like a fraud … married to a man but clearly gay.

Here’s a photo of the new lovebirds. Wiley and Morelli sitting on a tree. They sure look good together, don’t they? 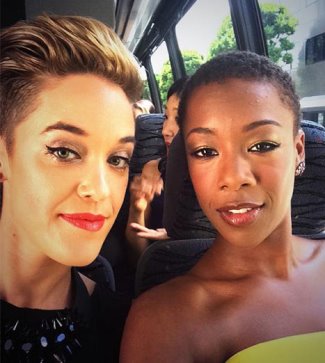 And here’s Lauren and ex, Steve Basilone. Steve, for those of you wondering, is a writer/producer known for co/producing The Michael J. Fox Show and The Goldbergs. 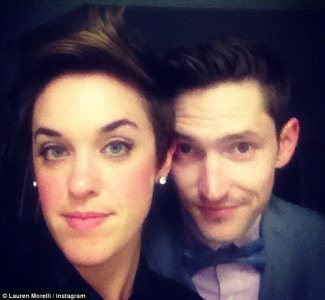 The end of a marriage is always sad, sad, sad but it would be tragic if Lauren, after realizing she’s a lez, continued to pretend that everything is A-OK and live the life of a wife married to a straight guy. We feel for the husband but their divorce is a better outcome for him rather than being trapped in a marriage with a woman who loves someone else.

Last May, Lauren wrote an insightful article about her coming to grips with her sexuality. Here’s an excerpt from Identities.Mic:

I realized I was gay in fall 2012, one of my first days on the set. It wasn’t so much one thing, but the sum of many small details: how uncomfortable I felt around groups of lesbians or how I considered myself (shrug) a “not very sexual person.” When considered alone, these seemed like little quirks that made me me. Wanting to read a book instead of have sex is a perfectly reasonable preference to have, right?

But on set, these small moments came into sharp relief, and I found myself answering to an endless stream of cast members who peppered me with questions like a gaggle of kindergartners curious about their new teacher. “Are you dating anyone?” “You’re married?” “To a man?” “But you used to kiss girls?” “Do you miss it?”

I was finally forced to consider a question that had never, ever occurred to me before: Holy shit, am I gay?

Turns out she is. And good for her for acknowledging her gayness and not hiding inside the closet.