Kirsten Dunst Swimwear. Kirsten Dunst, the little girl we first met in the Brad Pitt-Tom Cruise movie, Interview With A Vampire, is all grown up. Well, she’s actually been a grown-up since forever but we still remember her as the 1990s vampire girl. Which is why seeing her in her two-piece black bikini swimwear is a little weird. Want more celebrity bikini girls? 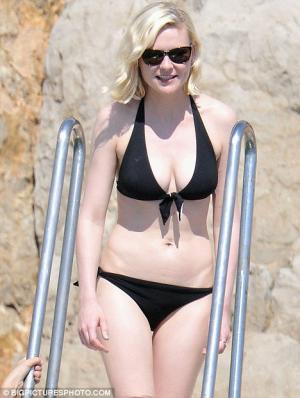 UPDATE, 21 June 2011: Kirsten has always come across as a very good actress but she can now add “acting award winner” to her resume’ having won the Best Actress Award (Prix d’interprétation féminine) at the recent 2011 Cannes Film Festival. Kristen bagged her trophy for the science fiction drama, Melancholia, which is getting fabulous reviews from critics. The film is rated fresh (71%) at the review aggregator, Rotten Tomatoes, so its one we’re looking to watching at the cinema.

Kristen is also starring in two upcoming movies, On the Road (about the Beat generation) and Upside Down (about a man searching for a long-lost love). We’re pretty sure you Kristen fans are looking forward to seeing these films.

Okay, now that you are sufficiently updated about Kirsten’s award and projects, let’s go back to the original topic of this post, shall we? You know, something about Kirsten Dunst swimwear. The actress, we just recently found out, had an underwear photoshoot with noted portrait photographer Mark Seliger. Here’s one of them photos. [Update: Sorry, we had to delete said photos.]

Maybe you can tell us what this photo was for? We’re not sure whether its for an underwear advertisement, or whether its for a magazine editorial, or maybe Kirsten just felt like having a photo of her wearing her lingerie while riding another girl.

Now, the next pic is for those of you who are looking for Kirsten in beach bikini swimwear. We already published one above but some of you want more, more, and more. So we’ll give you this one. Nice two-piece swimsuit you’ve got there, Ms. Dunst!

Kirsten also did a bikini photoshoot with photographer Marc Baptiste and he gave us this pretty cool photos.

Update: We had to delete some of the Kirsten Dunst swimwear photos. Sorry.