Kim Kardashian Two-Piece Bikini. For the many, many fans of Kim Kardashian. Here’s your curvy and gorgeous idol enjoying the sun, sand, and sea in her black two-piece bikini swimsuit. More beach bikini photos of Kim after the jump.

So what do you think of these Kim Kardashian two-piece bikini look? Want more celebrity bikini babes?

OTHER BLOG ENTRIES WE WROTE ABOUT KIM KARDASHIAN

What could be the reason behind the breakup between Kim Kardashian and Reggie Bush? A third party perhaps? Or they’re just too busy doing their own separate stuff? These two, we must say, look great together. Too bad it didn’t work out for them. 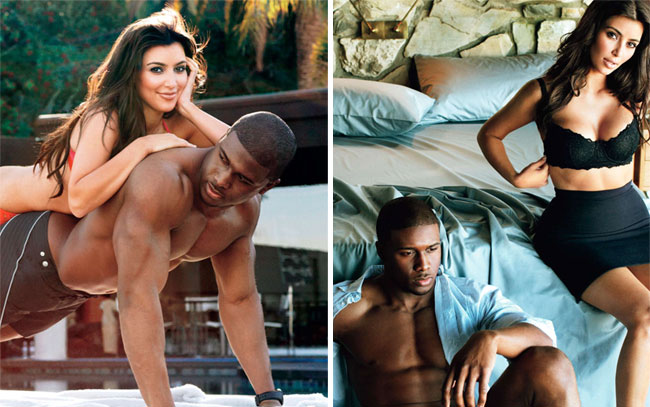 According to a source as quoted by EOnline: “They love each other a lot and hope someday they can make it work. But for now, he starts his football season this week and Kim starts filming season four of Keeping Up With the Kardashians, and they just need this time apart.”

Look who’s already preparing her 2010 calendar? It’s Kim Kardashian. Yeah she’s sexy and all but for some reason we get Khloe more than we get Kim. We think it’s because Khloe is more fun-loving.

Reggie Bush and Kim Kardashian at the Superbowl
01 February 2009

We love these two. Well, we loved Kim first when we watched her in Keeping Up With the Kardashians. And then we learned to love Reggie too. They should marry already and make babies because they are soo in love and they look good together.

Awww, are we pathetic or what?

Hmmm. It turns out that Kim Kardashian has a calendar and, this time, it is for public consumption unlike that calendar she made exclusively for boyfriend Reggie Bush. Anyways, does this particular photo reminds you of Elvira, Princess of Darkness?

What is hotter, the above Kim Kardashian two-piece bikini photos or this one-piece leather outfit?