Kim Cloutier Actress on The Cobbler. We are updating this 2009 post to mention that Kim is now a Hollywood actress. She starred in the Adam Sandler movie, The Cobbler which was released in 2014. Like the rest of you, we are keeping our fingers crossed that she’ll continue to get regular acting gigs.

Here’s Kim as Adam Sandler’s love interest in The Cobbler. 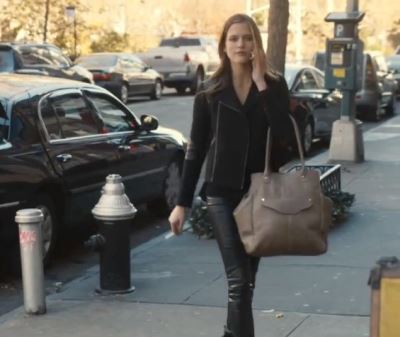 “Kim Cloutier actress” has a nice ring to it, right? She also looks kind of a badass in her girls leather pants.

What was your reaction to getting into the Swimsuit Issue?
I was so happy. Oh my God, I was so excited, I called all my family and I told them the good news. I had dreamed about that day for a long time. It’s huge, it’s really big and the day I made it I just said, ‘Wow!’ I had to sit down and take a deep breath after I found out and then I called everyone.

In all honesty, is modeling really that hard?
I would say the job isn’t, but all the preparation is. All the traveling to get to the jobs and being on your own is the hardest part. Staying at different hotels by yourself and not being around your friends and family is hard, but the job itself is not that hard. The hardest part is being on your own and being in amazing cities that you would like to share with someone else, but you’re there and all alone. Again, it’s great to see all these cities that I would never had seen had it not been for this job.

At what point in your career do you know you’ve made it?
I think it was when I found out I got into Sports Illustrated. That’s when I knew I had made it. It’s like a confirmation that you’re doing a good job and have reached another level. It’s just another level.