Kenny Rogers Plastic Surgery. Kenny Rogers, one of our favorite country singers, reportedly had a facelift but he soon regretted it. So include him in your list of male celebrities who underwent plastic surgery but who were not satisfied with the result. 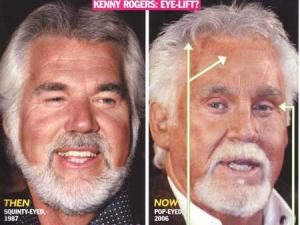 The country music icon tells us more about his plastic surgery adventure in this interview with People Magazine:

Let’s cut to the chase. Have you had plastic surgery?
Yes, I have. I did a lot more a long time ago. Dolly (Parton) used to kid me about it. But like everybody I blame the media for it. The first six years of my career, I got more comments on my weight than on my singing. So I think I became so self-conscious that I started working on it harder.

Last year I had so many lines coming in at the side of my eyes up here. So I went in and got my eyes done, and I’m not happy about it. (The surgeon) is going to go in and fix that for me. They’re too tight around the eyelids for me. It drives me crazy. I wake up in the morning, and Wanda says, “You look great.” But I know what I want to look like. If we can fix that, then I’ll be glad I did it. If we can’t fix it, I’ll regret it or get used to it.

I think when you’re in the public eye, you feel a pressure to stay younger looking. I guess that’s what makes the guys who don’t do it so special. I’ve always said that gray hair looks good on everybody but yourself. To me, it makes me look old.

So Famewatchers, if you’re gonna go for a facelift or any kind of cosmetic surgery for that matter, better find a good doctor who won’t destroy your face.

Here are two more Kenny Rogers plastic surgery before and after photos which we grabbed from the internets. 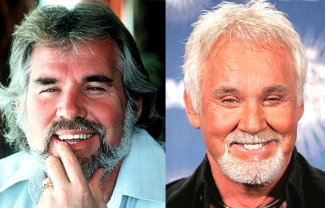 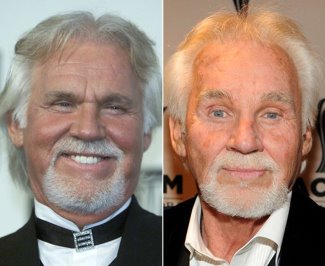 In conclusion, let us end this post with our favorite Kenny Rogers photo which shows him in all his un-surgeried glory.