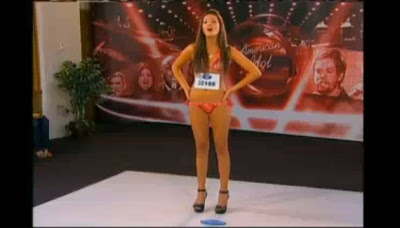 Seems like Katrina is an expert in working that mike, eh? Do you think she will do well on Idol? She might not have the singing chops that the others have but, boy, isn’t she entertaining. 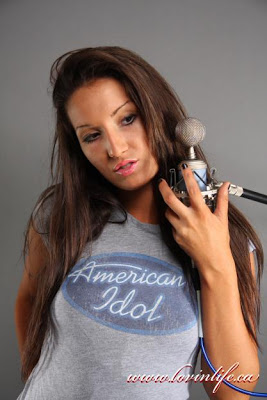 UPDATE: Joel McHale on American Idol: Ryan, Bikini Girl, Von Smith, and the Blind Dude (20 January 2009). Har. Har. Har. Poor Ryan Seacrest, he is everyone’s butt of jokes. Seriously. I love to make fun of him but sometimes you gotta feel for the guy. Well, it’s part of the territory if you’re rich and famous [although in Ryan’s case he is, according to Kathy Griffin, famous for no apparent reason].

Update 2: Katrina Darrell is a Hooters Girl (22 January 2009). Our bikini girl, Katrina Darrell, used to work at Hooters where she was fired after missing work because of her American Idol audition. 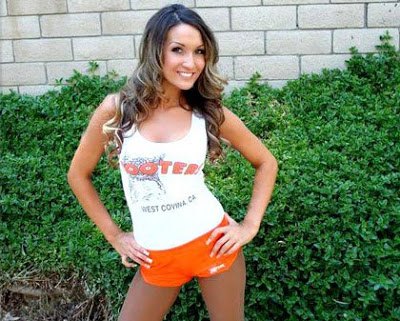 Radaronline quotes a friend of Katrina: “All Katrina ever talked about was becoming famous. Her one aim in life was to make it in Hollywood. Some girls who work at Hooters are embarrassed by the tight shorts and skimpy tops they have to wear, but Katrina loved it. She always had her shorts pulled up the tightest and her T-shirt knotted up to show off the most midriff. She loved the attention. But she made it obvious she was only working at Hooters until she got a break in show business.”

“‘When I get my big break, I won’t let it get away,’ she vowed. It was no surprise to us that Katrina would turn up for auditions in a bikini, flirt with Ryan Seacrest and get in a fight with a judge. She definitely knows how to get attention.”

“Katrina would come in for her shift, take a phone call and then suddenly announce ‘I’ve gotta’ go. I’ve got an audition. And she’d go racing out of the restaurant.

“After the third time, the manager told her ‘If you leave, you better not bother coming back.’ Katrina said the audition was too important to miss. She went running out of the restaurant and she was fired.”