Olympic gold medalist Julia Mancuso is reportedly planning to come up with her own underwear line and she’s going to call it Kiss My Tiara. That’s what the Associated Press is reporting anyway when they did a story on Julia about her preparations for the Vancouver 2010 Winter Olympic Games.

Between skiing and surfing, she’s also found time to showcase her creativity again — by launching her own underwear line.

“I’ve always wanted to be a clothing designer,” said Mancuso, who plans on naming her new line of undergarments Kiss My Tiara. “The one thing I know I can design that most skiers don’t design or have is awesome underwear.”

We must say that we really like the name Kiss My Tiara. It’s intriguing and colorful and, most importantly, very inviting. If we are Julia, we would have copyrighted (trademarked?) the name already before someone else does. 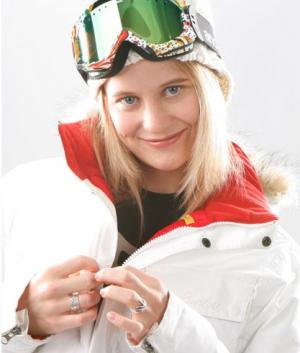 From the NY Times:

Gold medalist Hannah Teter is not shy: The U.S. snowboarder shed her Burton snow gear for Sports Illustrated’s swimsuit issue; an outspoken vegetarian, she condemned the hunting of baby seals for PETA; and at a news conference Thursday with her teammates, she shamelessly plugged the energy drink Amp, one of her sponsors.

But Teter also is not stingy, generously donating the prize money she has won on tour to international charities providing relief to Haitian earthquake victims. She said she would do the same thing with the $25,000 she would get from the United States Olympic Committee for winning Olympic gold in the halfpipe on Feb. 18 at Cypress Mountain. “Yeah, I would,” she said. “Hopefully, if I get it.”

If the defending Olympic champion falls short, she has other ways of raising scratch for causes that are, despite her winner-may-care attitude, dear to her heart. Combining brash exhibitionism with her entrepreneurial/philanthropic spirit, Teter has a new business in mind.