Joseph Sikora Shirtless Photos and Other Stuff: Today in celebrity workout, we bring you this photo of actor Joseph Sikora curling his biceps with a 40 lbs dumbbell. Ain’t he looking hot especially with them white tank top shirt he’s wearing. That’s the perfect outfit to wear to the gym if you have the physique to show off. Right? 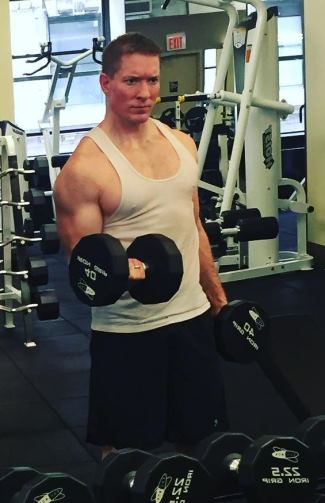 Anyhoo, like Omari Hardwick and Adam Huss, Joseph Sikora stars in Power, a TV series airing on Starz which is drawing a big audience and is being praised by the critics.

What do you think of Sikora in his jumpsuit? Pretty cool, huh? 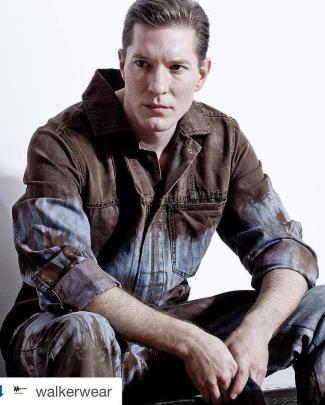 In Power, Sikora plays the role of Tommy Egan who is described by wikia.com as a “tritagonist and Ghost’s (Omari’s) right hand”. We were intrigued by what “tritagonist” means so we looked it up on the dictionary and, apparently, it means “the person who is third in importance, after the protagonist and deuteragonist, in an ancient Greek drama”.

So there you go, you didn’t think we’d be having a vocabulary lesson here on Famewatcher, didn’t you? Hehe. But let’s go back to talking about shirtless actors because that’s what we do best. Check out this Joseph Sikora shirtless photo which shows us what his gym workouts have sculpted his body. Beautiful. 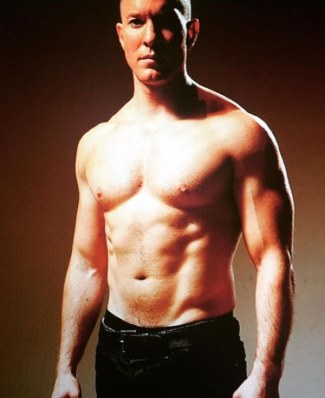 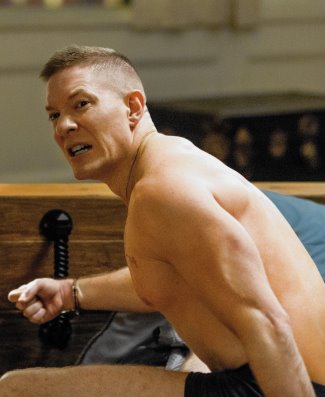 Is he a briefs or a boxers kind of guy? Looks like Joseph a boxer briefs dude. 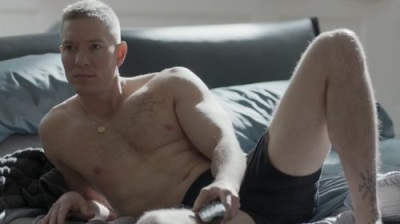 Or his character Tommy Egan is. Here’s the last Joseph Sikora shirtless pic. 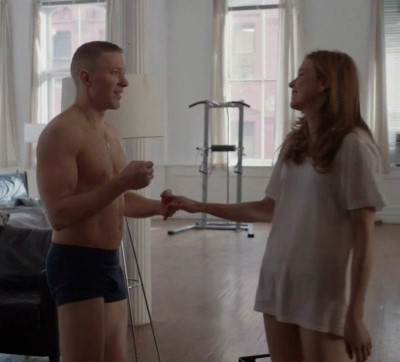 Is Joseph Sikora Gay or Straight? He is straight and married. She’s a makeup artist so she’s familiar with the entertainment world and does not get jealous with all the s*x scenes that her husband has to do on power.

From a Vice interview:

Joseph Sikora: My wife is in the business. She’s a make-up artist.

Okay. But she’s still your wife.
JS: Yeah, but I guess the point is she understands the inner workings. She’s been on set and seen s*x scenes happening for the past 18 years, so she understands that there is a sock on my d*ck and a dam on the v*g*na for the girl and that 99 percent of men are limp that time.

NN: It’s not s*xy.
JS: It’s not s*xy as much as it’s technical—and it’s acting. I mean, there’s a certain amount of truth and “falling in love” that has to happen. I believe you need to fall in love with that character, but as soon as they call “cut” and you don’t stop kissing, there’s something wrong with you.

Sikora has been in the acting biz since 1987 and his Power character, Tommy Egan, is his biggest role to date. Here’s what he says of his role as a tritagonist (via urblife.com):

I think Tommy will prove to be my breakout role. I think I will do films and other stuff but after this I think for a long time the fans will still call me Tommy. Everybody on the street calls me Tommy and I know other actors who won’t respond to that and say “I’m this and I’m that.” I’m very grateful to Power, Courtney Kemp Agboh, and the character Tommy. That whole thing about taking it seriously and taking it lightly, I’m not that precious.

According to the Chicago Tribune, he went through five auditions to bet the part. Here’s another quote from Joseph:

Parts like this just don’t come around often, if ever. The first time I read the script I really, really wanted it. I knew I could murder this role. In a sense this show is about following your dreams. Even getting this role was like realizing a dream for me. I have always believed that my dreams would come true. I knew something like this was going to happen, believed in my heart. Has it changed my career? I am still constantly auditioning for film and television, so no changes yet. But after this season I think it will. Still it is a good thing my wife works.

Congratulations to Joseph on his success and props to him for following his dream no matter what!