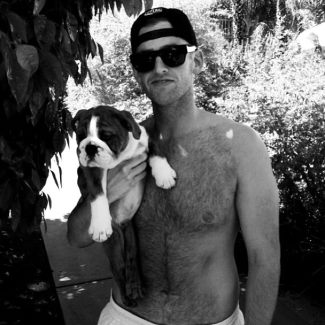 What, you ask, a gay guy who does not shave or wax? We know, right! That he is a gay dude with unruly body hair makes us like because it may mean that he is not vain or into his looks. But then again, maybe he is just lazy.

Anyhoo, Jonny Drubel will be starring in a new reality show called Rich Kids of Hollywood on the E Chanel. [Update: Oh wait, it’s actually called Rich Kids of Beverley Hills.] We don’t know if Ryan Seacrest (aka Kathy Griffin’s nemesis) is behind this but if he is, he should answer for it before St. Peter in the same way that he should answer for the Kardashian Klan that he inflicted on us.

More about the show from channelguidemagblog.com:

In E!’s new # Rich Kids Of Beverly Hills, billionaire and millionaire 20-somethings let cameras document their lavish lifestyles, where there’s no holding back when it comes to YOLO or flaunting their wealth. Social-climber wannabes will revel in E!’s voyeuristic look into the privileged lives of this group of friends, who — as fortune would have it — were born into some of America’s wealthiest families. 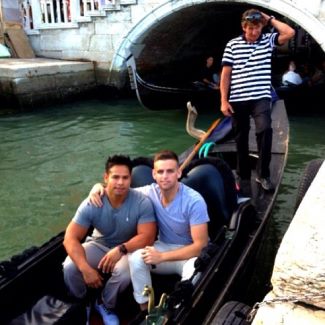 Is that cute guy his boyfriend? Nah. We are told he is single. Maybe his BFF or something. 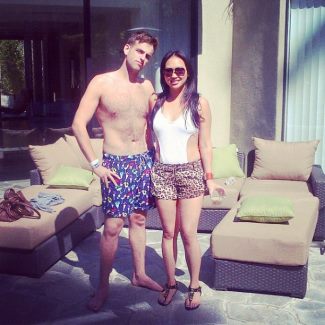 Jonny in shorty shorts with a galpal. Are these two going swimming? He should wear a teeny weeny Speedo bikini next time. 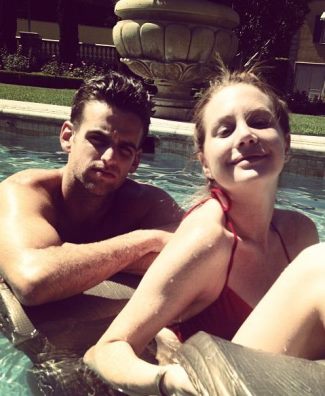 Jonny did an interview with backlot.com where he talks about his role on the show, his boyfriend/partner preferences, and the celebrities he likes:

The Backlot: The title says it all — rich kids of Beverly Hills. How would you describe your role in this group?
Jonny Drubel: I think my role in this group is being the one everyone turns to for advice, whether that be logical advice or just advice they want to hear. Maybe advice that they need to hear too. I’m definitely that person. I guess I’m also dramatic as well. A drama queen. Good God! That’s so gay.

TB: Do you have a particular type you seek out?
JD: Well, I consider myself to be — and some don’t agree with me — a little cub. I have chest hair. I have all that going on. I guess I go for more of a bear-y look, but I don’t necessarily have a type. I do like a little bit older because I think I’m mature for an age. I’ve gone on dates with younger guys, and I find they’re very difficult because there’s not much I can talk about with them. I date older, but as long as you’re nice, I’m OK. I don’t care about the whole body thing. F*ck the whole body thing. That’s so dated.

TB: Let’s hit the harder questions: Who are your celebrity crushes?
JD: Ooh, good one. First of all, I love Drake, the rapper. I love a guy who knows what he feels. That’s very sexy. I love Robin Thicke. His voice is amazing. Do you know Michael Vartan? I see him all the time at my grocery store and I fawn. I just sit there and stare. It’s actually embarrassing. Oh, I also love Andy Cohen. He’s very sexy. Oh yeah.

TB: Interesting! He seems a bit devious to me.
JD: He intrigues me. You know what he is? He’s very funny and has that kind of knows-what-he-is thing. That confidence. He’s a swag. A swag.

We are liking what we are seeing about Jonny so far. We don’t know whether he will maintain his “likability rating” among us Famewatchers but we like the fact that a) he likes Andy Cohen and that b) he’s not actually depending on his family’s wealth.