Jon Cryer Hair Transplant or Hair Enhancement Procedure. What exactly does Jon Cryer mean when he revealed on the Conan O’Brien Show that his hair is an “elaborate illusion”? Watch the above video where the Two And a Half Men star talks about how a team coats his head (with about four hair) with something like a shoe polish that goes “swoosh” and that there’s apparently some salt sprinkling is involved. Hehehe.

As we were listening to Jon explain his hair procedure we were like, “Isn’t that too complicated a thing to do every time he needs to show some hair! Sure his hair looks great but would it not be better or more convenient to do a hair transplant a-la Peter Waterfield.” See Peter Waterfield’s Hair Transplant.

Anyhoo if you want to read what Jon said about his hair enhancement procedure, here you go:

“This is an elaborate illusion. This is the work of several talented professionals making the most of like four hairs. It’s amazing, actually, what they can do. I’m not wearing a piece or anything like that, but it’s a long involved process that starts with stuff like shoe polish, basically, that they coat your scalp at the top. They basically just paint — they get a roller type thing — and just whoosh along the top.”

He adds: “You have to decide if you’re going to go full Travolta and get the full front in. And then they literally sprinkle powder in from a salt shaker. So this is, like I said, four or five hairs in total.”

Asked by the host on what happens if it rains, Jon had this to say: “You’re out of luck. It flattens out and you can get the nice little rivulets going down. But thankfully, your eyebrows will channel it down the side.”

But is there really a hair enhancement procedure like Jon describes? It’s a lot of work to do for something that’s easily ruined by mere drops of rain. It’s too complicated to be true, right? Sounds like one needs a “NASCAR-like pit crew of hair magicians” to get this thing done. He must be joking, right? Apparently, not.

According to a Daily Mail commenter, here’s what Jon’s team is probably doing to give us the “elaborate illusion” of hair: “They use Kera Fiber. You can buy it online. Basically, it is these little granules you put on your hair. Then they use Topik, a spray. Then it is sprayed again to hold the stuff in place. Just dont go out in the rain or it will run down your head. Travolta has used it for years.”

True enough, there’s such a thing as Toppik as well as Kera Fiber. Here’s a video demonstration on how Toppik works:

And here’s another one for Kera Fiber:

Interesting, no? Personally, we’d rather go for a hair transplant if ever we go bald but its good to know about other options. Want to check out Jon’s “before and after hair treatment” photos? Here’s one: 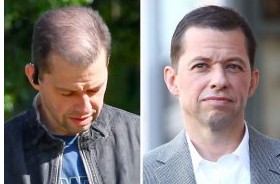 And here’s another which includes a pic from when he was much younger. 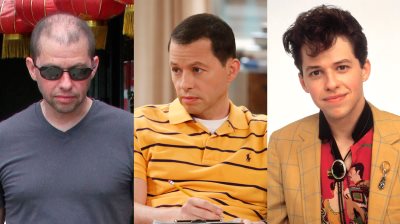 He sure has got a lot of hair back then, no? But then again, maybe he is wearing a wig on the right most photo? Something about it just does not look right. What do you think?