These shows might not be pitted directly against each other but it’s still interesting to speculate on which one will beat the other in the ratings game: Shaq’s Versus or John’s reality show, which we strongly suggest should be called The Daly Show, to be aired on the Golf Channel? 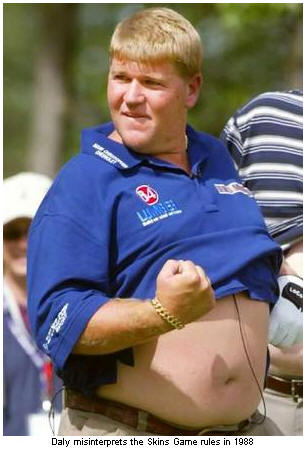 The AP reports on The Daly Show: “John Daly says he hopes an upcoming reality show featuring him will provide a glimpse of his new-and-improved boring life. The popular player said Wednesday he is focusing on his golf career, which has been marked by the highs of winning the British Open and PGA Championship and lows created by problems outside the ropes.”

The AP ads: “Daly’s attempt to turn around his life and game is being filmed by the Golf Channel, which plans to launch a reality show early next year. The day before competing in the first round of the Buick Open, a crew planned to follow him as he recorded a song he wrote at Kid Rock’s studio and performed mundane tasks such as ironing the colorful pants he would sport at Warwick Hills.”

Earlier, in the world of sports …. check out our entry on Stewart Cink below.

Stewart Cink Wins British Open 2009 – Golf Champion (posted 19 July 2009). Congratulations to Stewart Cink for winning this year’s British Open. We kinda feel bad for oldie Tom Watson but only a little because he has several major titles to his name. 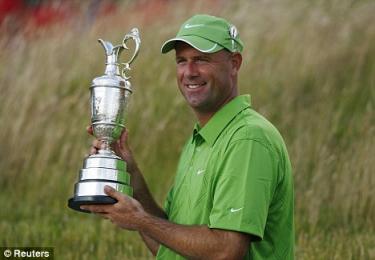 Anyways, here’s Stewart on his victory: “Extraordinary just tips the iceberg. To play one of my favourite courses, and against Tom Watson, it’s been surreal. I grew up watching Tom on television, but he’s turned back the clock this week. It’s been amazing. I feel so happy to have been a part of this, let alone win. It’s such a sweet feeling, almost indescribeable. It’s impossible to say what gave me the edge, I was over playing links in Ireland last week, and that was great preparation. I hit the right shot a lot, and my putting was right on target here.”

Again congratulations to you, Mr. Cink. We hope this will be the start of something great and that you’ll continue to win more major titles in the future.