Joel Dommett Shirtless, Underwear, Wedding. While we were not looking, our favorite underwear-baring British celebrity has gotten himself hitched.

Apparently, the two met on Instagram which makes them the first celebrity couple, that we know, who connected via social media and eventually got married. The hunky Brit gives us more details on their digital-assisted romance: “She sent me a cat emoji with the heart eyes. That is the modern equivalent of the old phrase ‘you had me at hello,’ now it’s ‘you had me at cat emoji’.”

Anyhoo, here are photos from Joel and Hannah’s wedding: 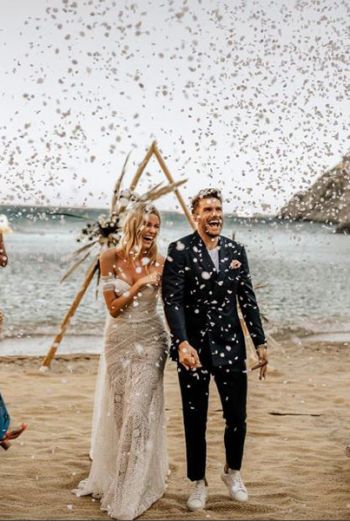 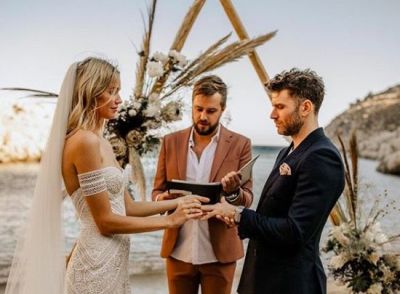 By the by, did you know that Joel hosts the British version of the Korean export The Masked Singer. Yay for him! He also continues to show off his underwear. Yay for us! 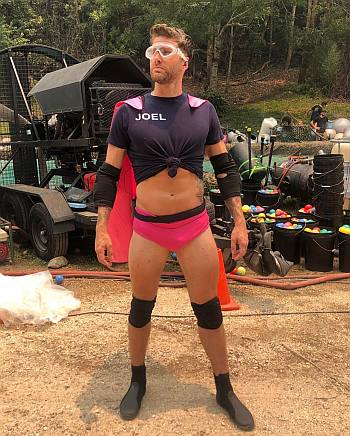 Who says men should not wear a bra? Our Joel, that’s who! And he’s rockin’ the men-wearing-bra look too. 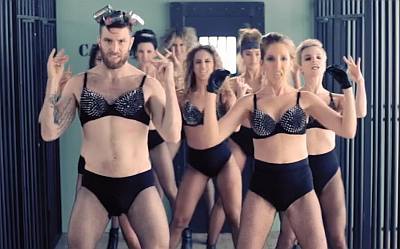 Joel and his gal pals are spoofing a Lady Gaga video. 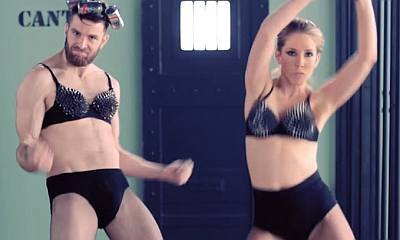 …..
Joel Dommett Underwear and Other Stuff (20 January 2016). So fellow Famewatchers, have you found yourself a reality TV boyfriend this Fall 2016? Well, if you haven’t yet, allow us to introduce to you Brit comedian Joel Dommett who broke the internets when he went a-showering on I’m a Celebrity Get Me Out of Here. So let’s check out these fabulous Joel Dommett underwear photos, shall we? 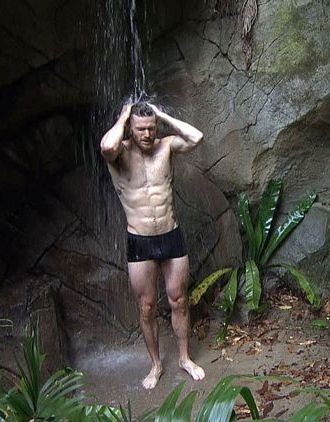 Question to our American readers: Can you name an American stand-up comedian as hunky as and looks as good in his underwear as Joel Dommett? [Update: Well, that didn’t take long. Our friend Kevin names another Joel — Joel McHale — as an American comedian who rocks his underwear. See Joel McHale Underwear.]

As it happens, this is not the first time our imaginary TV boyfriend stripped to his underwear. He showed us his black boxer briefs too — and eventually went all au natural — in an episode of Impractical Jokers. Here are some screencaps from the show. [Sorry, we had to delete the pics.]

Now, it seems like our Joel has the knack for appearing in kinda weird TV shows. Did you know that he guested on a show called World of the Weird where he painted using his little Joel. Seriously, we are not joking. Here’s our British hunk painting and the result of his effort.

Joel Dommett Skype Video. Screencaps from our imaginary boyfriend’s Skyping adventures. No we are not going to upload the vid. Neither are we linking to it. You gotta find it yourself. Sorry.

Joel Dommett Gay or Straight? He is straight but he played the role of a gay rapper in the 2010 movie Bashment. 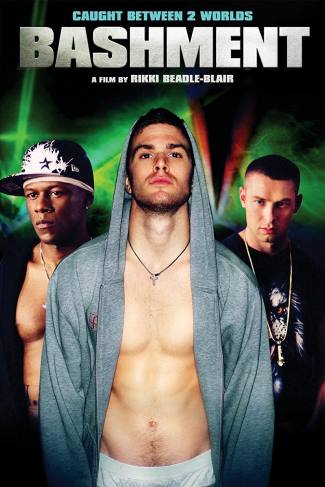 Critics described the film as “cliched” and “unsubtle” but, at least, it gave us this near gay kiss between Joel Dommett and co-star Marcus Kai. 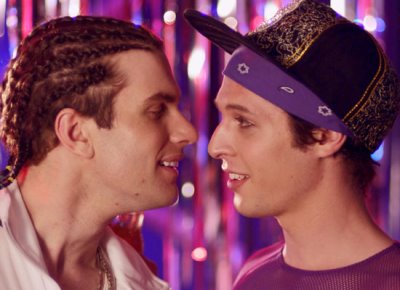 Joel Dommett Girlfriend? So if Joel is as straight as an arrow, does he have a girlfriend at the moment? We’ll he is flirty flirty with another I’m a Celebrity cast member, Carol Vorderman, so we’re gonna assume that he is single and available. He used to date Russian model Natalia Noir.