Time for another Kiwi hunk! Yay! This time we are focusing on actor Joe Naufahu who’s on the news these days after he was cast as a recurring character on HBO’s hugely popular Game of Thrones. From stuff.co.nz:

Kiwi star Joe Naufahu has landed a sought-after role on Game of Thrones.

Naufahu owns and manages the Auckland gym Ludus Magnus, but is reportedly out of the country filming in Europe until January. He is best known for his role as Liscus on Spartacus and for his stint on the local series Go Girls and also starred in the critically acclaimed drama The Last Saint, which marked his brother Rene Naufahu’s directorial debut.

So he owns a gym, eh? No wonder he’s got a body to-die-for! Check out this Joe Naufahu shirtless photo, ladies and gheys!!! 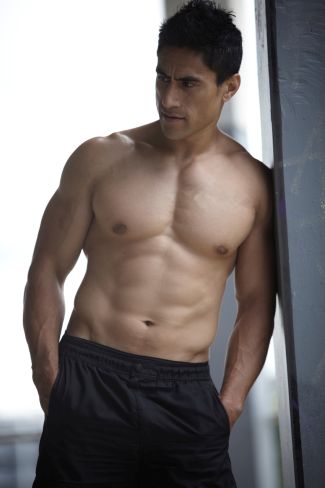 Joe Naufahu Girlfriend or Wife or Partner? And Family. So what is Joe’s relationship status? Does he have a girlfriend? Or is he married? Or is he single and still available for the ladies? Sorry ladies, he is very much married. Check out this wedding photo we grabbed from robbins.gen.nz: 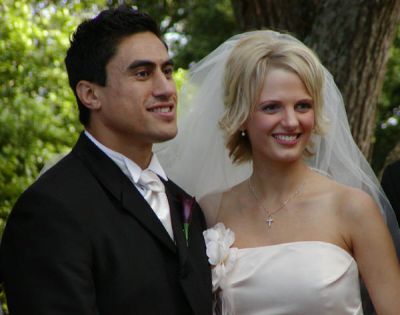 According to robbins.gen.nz, Joe and his wife Claire Smith tied the knot at the Wilson Home Chapel in Takapuna last 31 May 2003.

In an interview with treasures.co.nz, we found out that the couple have two kids:

Your kids are 2 and 4, have you spotted any sporting talents yet?
My boy Freddy was born with Erbs Palsy – it’s a rare occurrence where nerves get damaged during labor and for him it was his right shoulder that was affected. It’s hard to tell whether he’s affected by it yet but he tears around like a madman so I guess for now it’s all good. At the risk of sounding like a Show Dad – he can burpee, bear crawl, shuttle run, lunge, squat, and mountain climb a lot better than some adults can. He actually really enjoys it and will do it without request. Whatever he, or his sister for that matter, achieves in their lives – be it sporting arena or not – I will be a proud father.

Here’s a video of Joe and his son Freddy. Watch:

Joe Naufahu Gay or Straight? Of course he is straight. But he did play the role of a closeted gay husband — Eli Fa’asalele — on the TV show Go Girls. Eli eventually came out of the closet.

Okay, let’s end this post with another Joe Naufahu shirtless photo, shall we? 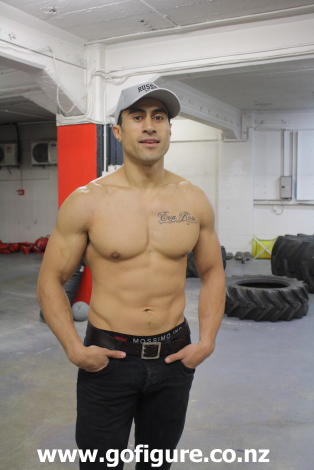 Look, that’s a bonus peekabo pic. Apparently, our Joe loves him some Mossimo underwear. If the Mossimo people are smart, they should hire this guy as their celebrity spokesmodel or something because we predict that he is going to hit it big in Hollywood. Do you agree, Famewatchers?

Want more Kiwi hunks? Go check out our post on All Blacks as Underwear Models.