Seriously, what’s not to like in this photo? A star football athlete? Check! A cute redhead? Check! A tight uniform that leaves little to the imagination? Check! A name that rhymes with you know what? Check! 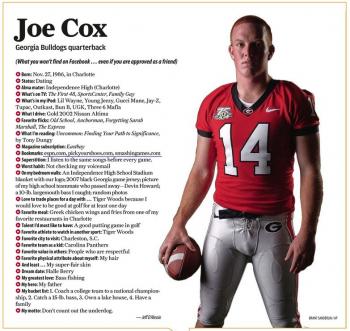 Oh, and he’s got tons of awards too. Here’s the list of the recognitions he received according to wikipedia:

Want more college hunks? Check out our post on these shirtless college footballers.

UPDATE: Sadly, despite his achievements which we listed above, our Joe Cox was undrafted during the 2010 NFL draft. Why? It’s most likely because of his size.

Here’s what the Sports Illustrated’s draft analysis for the Georgia quarterback: “Cox has limited playing experience on the college level, yet he did an admirable job last season when he stepped behind center on a full-time basis. He possesses solid quarterback intangibles, yet his size is a limiting factor, and as a result, Cox will be nothing more then a third signal caller at the next level.”

Apparently, 6’1″ isn’t tall enough to be a quarterback in the NFL aka The Land of Giants. The consolation for Joe is that there appears to be no problem with his size when it comes to the thing that matters to all men (and women). Right?