Jeans for Gay Men: Levi’s 501, Diesel, Sasson, Stocker Jeans. Is there such a thing as jeans for gay men? Nah, just wear anything you like so long as you’re comfortable wearing them. However, we’d like to give props to Levi Strauss and Co. for its gay-affirming television ads.

The company reportedly received a GLAAD award for its Levis 501 TV commercial above.

Here’s what happens: “A man in a sleek apartment tries on a pair of jeans but struggles to pull them past his ankles, when suddenly a phone booth containing a blond man partially erupts through the floor. They look at each other with mischievous smiles. Lowering his jeans back down for a moment, he forcefully pulls his jeans all the way up — turning his entire apartment into a complete outdoor street scene. The two men happily walk away together.”

We think the company deserves its GLAAD award not only because the advertisement is gay-oriented but also because it is fun to watch. 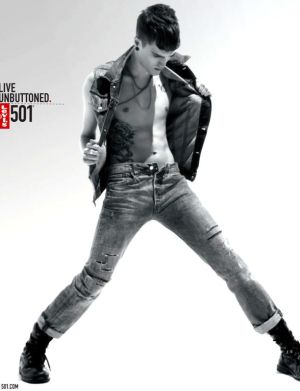 Now, this third commercial is from Diesel jeans. It’s kinda gay but we’re not sure if its gay positive.

Lastly, here’s a vintage 1979 commercial for Sasson Jeans. It’s a gay jeans commercial alright but we don’t think its targeting the gay demographic like the Levis 501 ads we’ve seen above. This is a gay commercial meaning its funny/cheesy commercial but not necessarily gay, that is, homosexual.