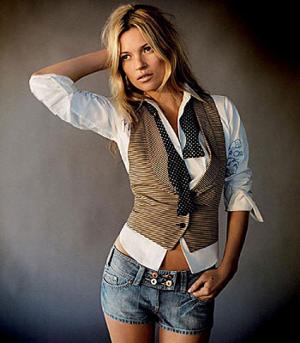 Jean Shorts or Jorts for Girls: Kate Moss in Jorts. What exactly are jorts? Here’s how the denizens of urbandictionary.com define it:

1) Slang for jean shorts. These are most often worn by the fashion illiterate and the fan base of the University of Florida. Note: This is the correct spelling; see also jhorts.

2) a combination of the words “jean” and “shorts” used to describe the hideous attire, usually sported by NASCAR afficianados and men over 40. Sometimes Jorts are accessorized with a lovely cellphone belt clip and a braided leather belt, but not always. Sometimes the Jorts wearer lets the Jorts speak for themselves.

On the other hand, here is how them wikipedia editors define jorts: “Jean shorts, occasionally called “jorts”, are a garment worn by women or men that covers the pelvic area, the buttocks, and the legs, stopping between the top of the thigh and the knee. They are simply shorts made from denim.”

We prefer the wiki definition better because it more aptly describes the Kate Moss photo above. Now, have you ever worn jorts in your life? Or have you totally avoided it because you don’t want to be mistaken as “fashion illiterate and a fan of the U of Florida”?

Eww. Are we the only ones creeped out by this ad? Hey, Kate, what message are we supposed to deduce from your ad, that girls should put their “flower” in a bag? Or that the Longchamp bag will save their falling “flowers”? Ewww. But that’s creative advertising for you. [Sorry if we have to use Friend’s Fat Monica vocabulary.] 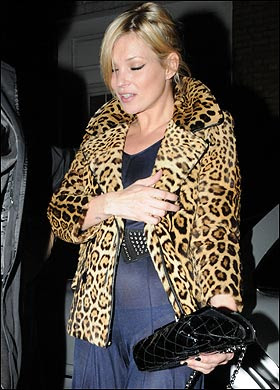 The Sun wants to know if Kate Moss is pregnant. Actually, we also want to know hehe.

GLOWING KATE MOSS reveals a bump as she steps out for dinner last night — adding fuel to pregnancy rumours. The waifish supermodel, 34, tried to conceal the bulge beneath her coat. [From The Sun]

Eh, Kate, there’s no need to conceal if you’re going to have a baby. Babies are gifts to the world, you know. Just ask that octuplet mom. What’s her name again, Nadya something?

But pregnant or not, we gotta admit that we’re kind jealous of Kate’s fur coat.

Earlier we asked, “Is Kate Moss Pregnant?” Well, she is pregnant indeed according to a source who blabbed to News of the World. Says the source as quoted by NotW:

“It’s true. Kate is pregnant. She’s overjoyed at the news. She’s past the 12-week stage so she’s telling more and more people. Her friends are delighted for her.”

“Kate and Jamie are closer now than ever. She’s not going out as much as she used to but when she does he puts a protective arm around her. He’s really excited at the prospect of becoming a dad. He already dotes on Lila Grace and is besotted with Kate.

“She’s a devoted, loving mother who enjoys a wonderful relationship with Lila despite a career that takes her all over the world.[News of the World]

Congratulations to Kate and her rocker boyfriend Jamie Hince.