Jason Gardiner Hair Transplant (posted 5 April 2014, updated). Dancing on Ice judge Jason Gardiner is one of the lucky guys in the world who can rock the bald look. He — like Bruce Willis, Yul Brynner, Vin Diesel, Mark Strong, and the hottie White House chef that is Sam Kass — looks hot and shaggable even when he’s got no hair.

Seriously, check out Jason as a baldie. Now, tell us you don’t want to, you know, dance the horizontal dance with him. You are lying if you say you don’t. Haha.

He also looks great with hair though! So we don’t consider it unfortunate when he decided to cover up his hawt baldness. Check out these before and after Jason Gardiner Hair Transplant photos: 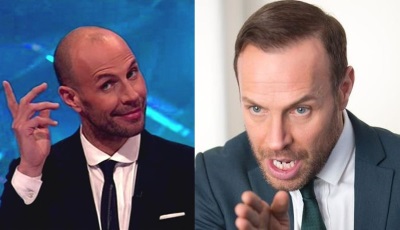 His hair is looking good. 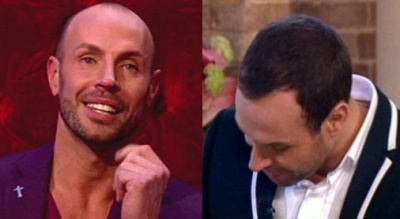 Here’s Jason telling us why he decided to undergo a hair transplant surgery (via ok.co.uk): “I tried to embrace and live with being bald and everything. The ironic thing was that coming back here (in the UK, ed) and doing the fashion stuff and makeovers. That highlighted for me that I was never going to be able to change this look. I was forever bald and I started getting suffocated by that. I know that sounds crazy. Sometimes I do think, ‘I can’t believe I allowed it to affect me so much’. Then looking and researching and seeing that, you know, the technology has improved so much.”

Some questions and answers on the Jason Gardiner hair transplant procedure that some of you might be interested in:

Who is Jason’s hair doctor? His name is Dr Chris Ziering of The Hospital Group in London. Jason has this to say about him: “Dr Ziering is a genius! X Thank you I’m very happy with the results.”

Dr. Ziering tells us how Jason’s transplant procedure was done (via ok.co.uk): “This is Jason’s own hair. It’s a procedure where you act as the donor and the recipient for the procedure. We actually take the hair from the back of the head and remove it in a strip. We design the hair line and what we are going to construct for him. It’s your own hair – it’s an organ transplant. You’re moving, in Jason’s case, 3,501 individual hair follicles from the back of the head in one strip and you are able to spread it out, and if you can do it artistically and in a proper way, to give the illusion of a lot more hair.”

How much is Jason’s hair transplant? The Daily Mail reports that his first hair transplant costs $35,000 (£22,000). Because of his “very advanced balness”, Jason had a follow-up FUT which costs £6,000 according to the Mirror.

A spokesperson from The Hospital Group tells us why (via Daily Mail): “Jason’s cost $35,000 because he had the platinum service, which means the whole surgery unit was closed down for him, so no one else had surgery that day. The hair transplant is performed in the UK too though and costs range between £3,250 and £9,000, depending on the number of grafts need and the density of thickness wanted.”

Well, that’s more affordable to non-celebrity/non-rich patients like us, no? £3,250 and £9,000 is still not peanuts but it is not prohibitive for someone who wants to solve his baldness.

Is hair transplant surgery painful? It’s less painful than a sprained ankle, if Jason is to be believed.

From the Mirror: “Asked to describe the pain on a scale of 1 -10, he said: ‘Anaesthetic injections = 5. Once they kick in =0. Post op = a tender 4. It’s really nothing painful to endure… a sprained ankle = 8.’ Later, he posted: ‘Day 1 post op & head is feeling tight with slight dull throbbing pain. You would never know I’ve had it done. No swelling or bruising at all. Photo taken just now in my hotel room in LA after my 2nd FUT procedure!'”