James Nesbitt Hair Transplant. Celebrities, they’re just like us. They have babies like the rest of us. They fall in love, go shirtless [see Shirtless Taylor Kitsch], get accused of husband-stealing, worry about their dick size [like Enrique Iglesias who talks about the size of his endowment in Enrique Iglesias Underwear], and lose their hair. 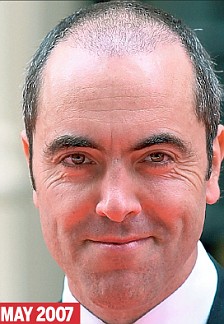 And here’s the “after” James Nesbitt hair transplant photo. 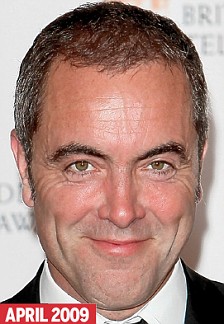 He does look nicer with more hair, no? More on James’ hair story from the Daily Mail:

Nesbitt began losing his hair in his early twenties and has always been vocal about his hatred of going bald. In 2001 he admitted taking vitamin tablets in an attempt to slow his hair loss, and four years ago he said he was using a lotion to try to stimulate his follicles. Although he said the sensation made his scalp feel like it was ‘going to explode’, he added: ‘It opens the pores of the scalp to encourage new growth. It’s ridiculous, but it’s horrible going bald. Anyone who says it isn’t is lying.’

Nesbitt, who used to worry that his baldness would affect his career, wore a thick black wig for his lead role in 2007 BBC drama Jekyll. ‘I’ve been saying to make-up artists for years that I want a full head of curly black hair and now I’ve got it,’ he said at the time. ‘It’s great that I finally get to wear wigs.’

…..
James Nesbitt Hair Transplant: His Own Words (01 December 2011). Two years after revealing that he had a hair transplant, talented Irish actor James Nesbitt continues to be asked about his hair. While shooting The Hobbit in New Zealand, he had an interview with the Daily Mail and told the paper that the transplant changed his life.

Quote: “It changed my life. Several years ago I began losing my hair, and like a lot of men it was a major concern to me – in fact, it was practically an obsession. But also I’m an actor, so I’m in the public eye a lot, and I really felt that my hair loss could affect my career prospects… If you’re working in the industry with the same make-up designers over the years and one of them says, ‘Look, this thing’s available,’ then you listen.”

The actor adds: “I have a great mate who’s a barber and he said, ‘The whole thing has changed; it’s much more advanced now.’ So I went along, and before I knew it, I’d had it done. People only picked up on it when I opened my big gob, as usual. I’m glad it has given them something to talk about. I think it was well worth doing. It works. It’s good. What am I supposed to say?”

Good for you, is what we’re gonna say to Neswbitt. According to the Daily Mail, the actor underwent two transplants which “involved taking hair follicles from the back of the head, where they were growing well, and moving them to the scalp.”

Nesbitt revealed that he’s “also using the approved medications finasteride and minoxidil to improve the quality of my hair and to prevent further hair loss.” Want more celebrity hair restoration stories? Check out our post on Edward Norton’s hair transplant.