Looking for a tennis pro to cheer for when your favorites are not around? What about cheering for Irishman James McGee? He is Ireland’s number one tennis player but, if you are not Irish, you may not have heard of him because he currently ranks at #195 in the world.

Like the US of A’s John Isner, James McGee turned pro at a relatively older age because he went to university before he decided to pursue a tennis career. He has a degree in Psychology from the North Carolina State University.

So why should you cheer for this Irish lad? Because he seems like a nice guy. Because he loves the game so much he travels to the boondocks of Gabon to play it. Because he doesn’t make the same amount of money that bratty tennis prodigies make (we’re looking at you Bernard Tomic). Because his tennis earnings are much less than his tennis expenses. Because he is the kind of guy who appreciates the game and who cried buckets of tears when he qualified to the main draw in this year’s US Open. The Irish Independent tells us more:

James McGee had never cried with happiness in his life until the glorious moment on Friday when he qualified for the US Open.

There had been plenty of tears of frustration and no little despair on the winding road to Flushing Meadows.

The 27-year-old Irishman has spent his whole career until now on the lowest rungs of professional tennis, the Futures and Challenger circuits, where prize money is measly and glamour non-existent.

Now he is at tennis’ top table and finds himself next to Andy Murray in the locker room.

That was written about two weeks ago before the US Open started. In case you are wondering, he lost in his first round match. Still, being in the main draw is an achievement for him. We hope he continues to qualify for the main draw in the four grand slams of tennis.

James McGee Shirtless. Let’s end this post with another shirtless photo of James McGee just because it is our mission to bring you the hottestshirtless tennis players. Thank us in the comments, baby! 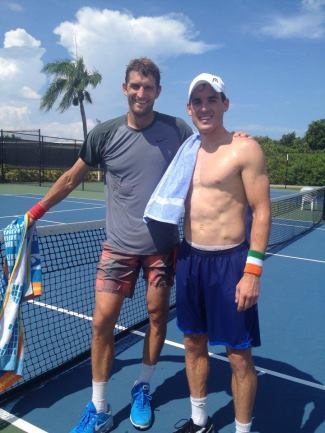 Does James McGee have a girlfriend?