So we sure are not surprised when he inked a deal Budgy Smuggler to design his own swimsuit range for the Aussie swimwear company. Here’s James modeling his very own Budgy Smuggler swimwear which he shared to his Instagram followers. 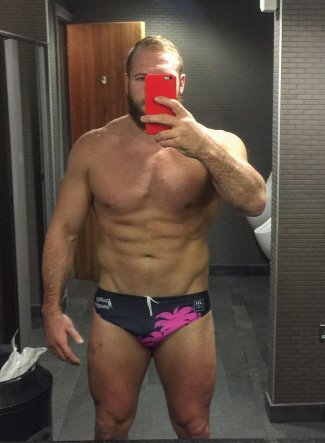 James on his Budgy Smuggler: “I have teamed up with @budgysmuggler and done my own James Haskell Health and Fitness range. Stay tuned they are coming soon!”

And here’s another James Haskell-designed Budgy Smuggler swimsuit which he shared with the following message: “Another new pair of @budgysmuggler coming! Red scrum caps! Stay tuned for them.” 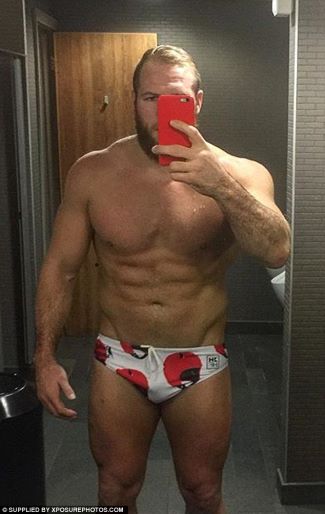 Now, if you are a superfan of our English rugby player, you should follow him at @jameshask. We follow him, thank you, because he ain’t shy about sharing his Speedo photos.

If the Daily Mail is to be believed, our James inked the deal with Budgy Smuggler after some people teased him about wearing this really skimpy swimsuit: 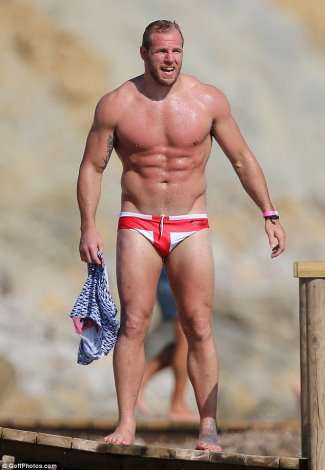 The Mail has the details on the partnership and what prompted it:

James’ partnership with the Australian swimwear label was born of ridicule. At the start of the summer he was snapped wearing a pair of skimpy Budgy Smugglers featuring St George’s flag while enjoying a holiday in Ibiza.

That led one national newspaper to mock the ‘shrink-wrapped snugness’ and the ‘provocative in-yer-face fabric’ of his trunks, which in turn fueled social media buzz over his body and provocative attire.

All the chatter led Budgy Smugglers to get in touch with the ripped athlete.

And the rest, they say, is history.

This James Haskell Budgy Smuggler partnership is good for our James because he is now modeling his very own swimwear line. Likewise, it is good for Budgy Smuggler because they are out to crack the British market. Of course, this is also very good for us who are fans of hot men in skimpy swimsuits. Right?