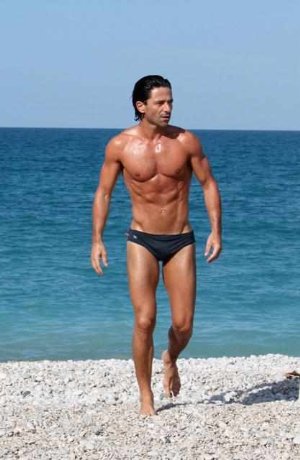 Here’s Jake as Mateo looking oh-so-hot in his skimpy swimsuit. We think he can give that James Bond actor a run for his money. Another photo of the Swiss actor looking cool in his squarecut swimtrunks. 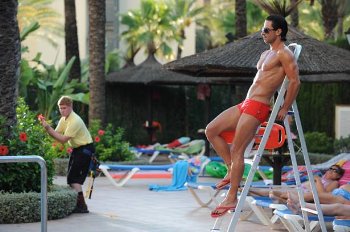 Most people of the world (like us) who have the misfortune of not being able to watch Benidorm (we’re told its critically regarded) will be clueless about Jake’s character (and why he keeps baring his body, not that anyone’s complaining or ) so let’s have some info on the Mateo Castellano character. Apparently, he’s some kind of a cad (via wikipedia):

Mateo is the only Spanish character in the series. He works as a barman and a receptionist and barman at the Solana. He is a rude, obnoxious and arrogant womaniser who more-often-than-not gets his own way. In Series 4 he ends up being arrested when a policeman thought he was a prostitute whilst wearing women’s clothes. It has been revealed he has a wife and 3 kids.

Hehe. It would be cool to add Jake Canuso’s cross-dressing clothes to our list of guys who wear designer dresses for men but, sadly, we can’t find a still photo of said episode mentioned above.

Anyhoo, we soon find out that Mateo Castellano might have a thing for men too (a womanizer who keeps his options open, eh?). From IMDB netizen angelexposed:

I only started watching Benidorm this season and thought Mateo seemed like your general male sex-craved pig. Was quite surprised when bought series 1 yesterday and watched earlier to find that Mateo had been having sex/engaging in sexual acts with Troy behind the pool bar (Janice caught him)? It seemed like there was such a dramatic change in his character over the past few seasons, as if the writers weren’t sure what to do with him. Did anyone find this a strange conflict? It seemed in episodes this series that he was disgusted with Les and seemed to make gay slurs?

Mateo is a great character, and has been from the first series. He’s compassionate, but self-serving. He won’t deliberately do anything to harm himself, but if there’s no cost he’ll help you out and almost never needs much persuasion, just some light blackmail.

They’ve been guilty of making him a plug to fill all holes (much like the character’s sexual preference) but as the show has matured he’s become much more of an established character in his own right. He clearly has two lives, one at the Solana and the other with his family, which we never see. He clearly cares what his family think of him, but he is probably amenable to offers from “the other side” and his flamboyant side is likely more than Latin in nature. More Greek than Rome.

Jake Canuso Underwear Update. Apparently, our Benidorm hunk participated in the reality TV show, Splash, where celebrities compete in a diving competition. The British version was aired on ITV and was hosted by Tom Daley. Here are some photos from the show. 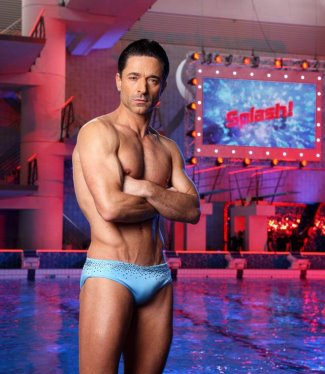 How did Jake do in the contest? Well, he was the runner-up so you can say that he did pretty good in the competition. 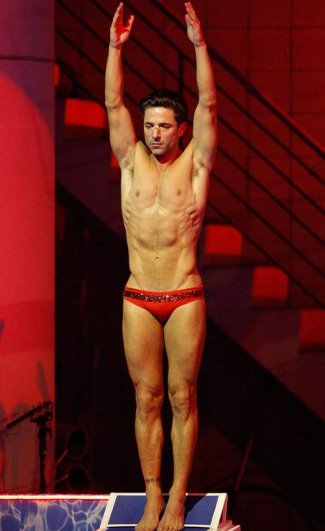 In 2013, our Swiss hunk published a 2014 calendar which featured him posing in his undies. 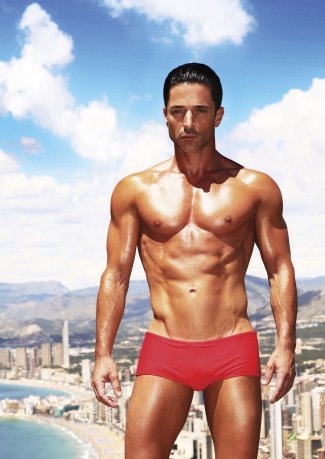 So which of these is your favorite Jake Canuso underwear or Speedo photo?