Jack Mackenroth Gay or Straight? We are updating this post because, apparently, some Famewatchers are wondering whether our Jack is gay or straight? Hmmm. What do you think? He’s gorgeous! He’s got a great bod! He’s got abs! And, most importantly, he looks good in and loves to wear Speedo! Of course he is gay. 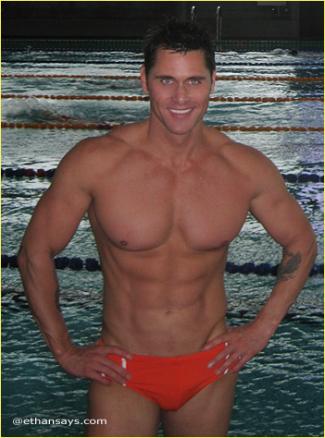 In a 2007 interview with queerty.com, he talks about coming out as a gay dude:

HOW WAS COMING OUT FOR YOU: Um, it was okay. I didn’t have a horror story that a lot of people have. I was at Berkeley and I had all these images of people doing their own thing. As soon as I left home, I kind of experimented with everything and had a couple girlfriends for brief periods of times. I just knew that it wasn’t right for me.

So I got a fake id and I started going to the bars in San Francisco. As soon as I walked into The Stud, I saw two guys dancing together and I was like, “Okay, this is what it’s supposed to be”. Shortly after that I started telling my friends and then the summer I came home after my freshman year, I told my mom.

Out of curiosity, we checked our Jack’s gaydar score on gayorstraight.com and this is the result:

Ain’t that something. Most people actually think that Jack is a very straight dude. But you know better now fellow Famewatchers. Right?

Jack Mackenroth Gay Boyfriend, Husband, Partner? What is our Jack’s relationship status at the moment? Is he dating anyone? Does he have a boyfriend? Or maybe he is married?

Jack and Steve Alexander were an item back in 2012 when the photo below was taken. They must have broken up because our Jack tweeted last year that he wants to have a boyfriend. 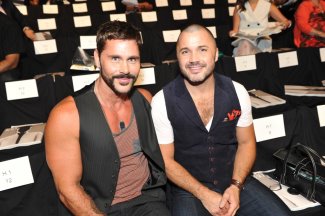 OUR PREVIOUS POSTS ON JACK MACKENROTH: 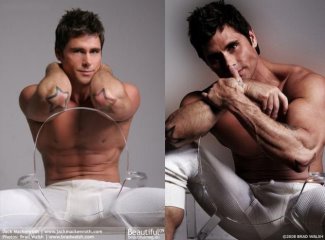 Who wants to bet that this dude can wear anything and that he’ll look good and comfortable in them? He’s that awesome. Oh, and did we mention that he’s a designer who joined Project Runway? He was one of the favorites to win his season but he had to quit because he got sick with MRSA or something.

More Jack Mackenroth Underwear. Of course our sexy jock isn’t only about the long johns. He wears other types of underwear too. Check him out in a low-cut briefs from which he modeled for Baskit Underwear, an American undies label based in Colorado.

Have you heard of another underwear brand called Todd and Terry? We haven’t heard about it either but here’s our Jack rocking his Todd and Terry square-cut underwear. 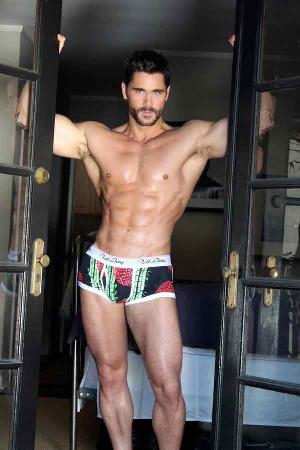 Apparently, Todd and Terry is an apparel brand from Australia which makes not only men’s underwear but sleepwear and swimwear as well.