JR Bourne Shirtless Photos. Like Michael Vartan, we should have included Teen Wolf hunk J.R. Bourne in our list of Shirtless TV Dads. That’s a younger and awesomely fit JR in the pic above from the 2007 theater play Mental The Musical. The photo is courtesy of the website dazzlingstarz.phanfare.com.

Wanna see JR in his underwear? Check out these stills from an episode of The Mentalist.

He looks great in boxer briefs, doesn’t he? No wonder there are petitions out there asking for shirtless/underwear scenes for Chris Argent, JR’s character in Teen Wolf. 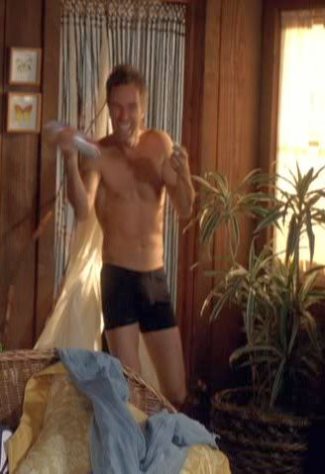 JR Bourne shirtless in his underwear. 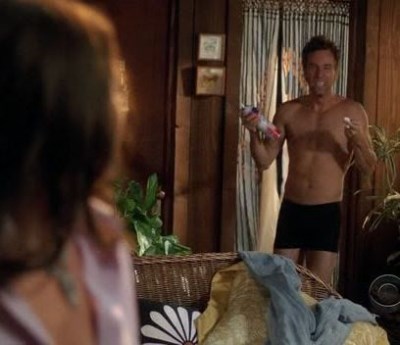 Another JR Bourne shirtless and underwear photo. If you are wondering whether he wears boxers or briefs in real life, check out his answer below in his Reddit Ask Me Anything (AMA) interview. 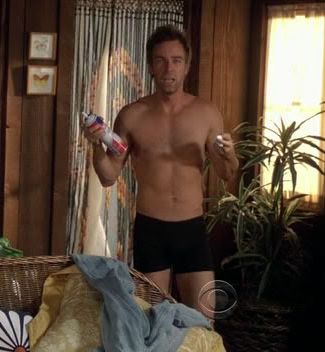 Look who’s shoulder-riding Nathan Fillion in the next photo below? [See: Nathan Fillion’s Underwear Photos.] Awww! How cute are these two Canucks? Do you sense a gay vibe in the image? JR and Nathan sitting on a tree. Hehehe. 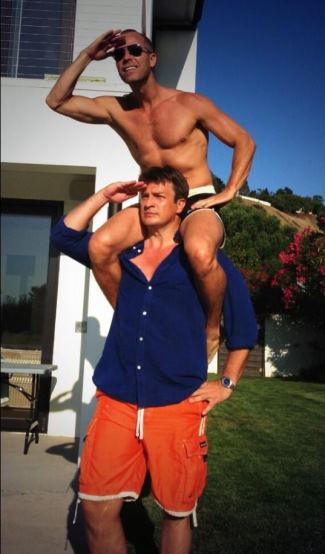 The last one is our favorite JR Bourne shirtless photo ever. Now, for those of you asking the “is he gay” question, here’s the gay-o-meter for our Canadian hunk: “According to 126 visitors JR Bourne is 60% gay. However, the average gay-rating on gay-or-straight.com is 69%, which means JR Bourne is quite straight in comparison to other celebrities on this website.”

All of you JR Bourne fans will be happy to know that he did some AMA (Ask Me Anything) on Reddit. Here are some of the Reddit questions he answered:

What’s it like being the absolute hottest dad on Television? I don’t know? I don’t know that I’m willing or capable of carrying that badge, but thank you.

How are you enjoying the Teen Wolf conventions? I know the Teen Wolf fandom can be a bit more… excitable than some of the others. I’ve loved them. It is really one of my favorite things to do to meet the fans face to face. It started back for me in the Stargate days, and I never had a bad experience with them and I haven’t had one with the fans so far. Their exuberance, their love, is tremendously appreciated. It’s a much younger fandom than the Stargate days, but I learn a tremendous amount from them and how they watch and view and take in and interpret the show, it’s kind of amazing and fascinating.

If you weren’t an actor what would you be? Would you like to be a werewolf hunter in reality? An architect! I loved the building and development of a house out of little pieces of cardboard and popsicle sticks as a kid, based on the house that I was living in, and I would change around the layout of the house, and add a pool. Primarily it was houses, not just buildings.

When you’re not in LA/Cali filming, what are your favorite ways to relax and unwind back in Toronto? Well, I live full time in Los Angeles, so I don’t get back to Toronto as much as I would like to, as my family is still there. But when I do go back, all I do is spend time with them, spoil my nieces and nephews, because they are all artists, going in that direction as singers, dancers, and directors. But I live here, so I unfortunately don’t get to go back as much as I like.

Are Tyler Posey and Dylan O’Brien as fun and goofy in real life, as they appear to be during interviews? :-D. Yes. None of that is put on, that is who they are, and it’s really kind of amazing to see them just be themselves.

That’s it for now. Ain’t it fun to know that he sometimes go commando? Haha.