Hot Olympic Rowers: Alex Partridge, Andy Hodge, Peter Reed, Steve Williams. Let’s add these guys to the list of male celebrities who posed in the buff for Cosmo Magazine’s Everyman campaign to increase public awareness for male cancer. And who are these guys, you ask? They’re British rowers Alex Partridge, Andy Hodge, Peter Reed and Steve Williams. They should have dropped that boat and gone full monty, no? 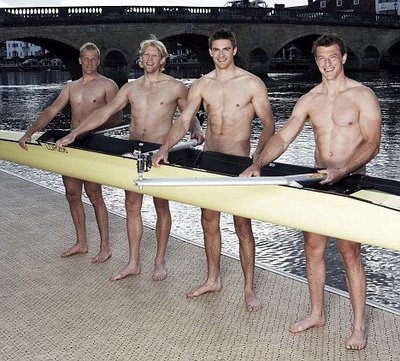 The successful quartet in their Spandex rowing outfits. 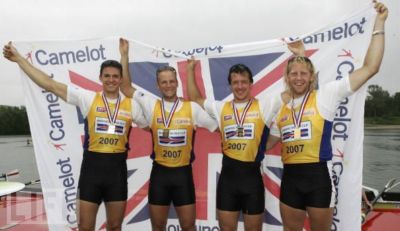 Some info you might want to know about these guys:

Alex Partridge: The U.S.-born Alex boasts of a silver medal (men’s eight) from the Beijing 2008 Olympic Games. He also has three gold medals (all from the coxless four event) from the Rowing World Championships. Outside of rowing, Alex’s interests include management stuff and, in fact, attended Oxford Brookes University to study Technology Management.

Andrew Triggs Hodge: Andrew aka Hodgey is from Halton, Buckinghamshire. He bagged a gold medal at the 2008 Beijing Games (coxless four) in addition to two gold medals from the Rowing World Championships. Hodgey, according to wiki, is an MBE. For us non-Brits, MBE stands for Member of the Order of the British Empire. We guess this means that Hodgey is a “Sir” or a “Knight” or something.

Peter Reed: Like Alex Partridge, Peter is actually American-born (in the beautiful city of Seattle in particular) but his family moved to Britain when he was a kid. To date, he has one Olympic gold medal (from Beijing 2008) and two World Championship golds (Eton 2006 and Giffu 2005); the three medals are from the coxless four event.

Steve Williams: Of these four guys, Steve has the boasting rights for being the “winningest” rower. He’s got two Olympic gold medals (2008 Beijing and 2004 Athens) and four gold medals in the Rowing World Championships (2000 Zagreb, 2001 Lucerne, 2005 Giffu, and 2006 Eton). Like Hodgey above, Steve is also an MBE. However, he was appointed an Officer of the Order of the British Empire (OBE) which, we’re guessing, is a rank above MBE. We guessed correctly, right?

Anyhoo, Steve announced his retirement from rowing last January 2010. This should give him time to enjoy the perks, if any, that comes with being an OBE.