Is This Blake Bortles’ Wearing Tight Underwear? Can some of you, fellow Famewatchers, confirm whether the sleeping guy above is …

Colin Kaepernick Underwear: Boxers or Briefs? When it comes to what he wants to wear down there, does San Francisco …

Kerry Rhodes Underwear, Shirtless Photos, and The Gay Question. We missed the photo below of Kerry Rhodes looking fabulous in … 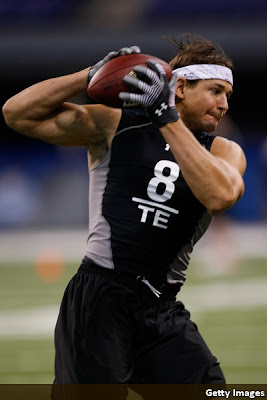 Dan Gronkowski is a University of Maryland tight end who’s been drafted by the Detroit Lions. Here’s a local television report on the day he was picked. Video after the jump.

UPDATE: Well, let’s update this post which we published two years ago to give you some updates on Dan Gronkowski. First, it might interest you to know that he is now engaged to Brittany Blujus. This is bad news to those of you girls who’ve been googling words like “dan gronkowski girlfriend” or “who is gronkowski girlfriend” and similar search terms. Yes, he has a girlfriend and they are getting married this month, July 2011. Dan, jokingly, stated on Twitter that their wedding is going to be bigger than William and Kate’s royal wedding.