Hot Men in Tank Top Shirts: American Gymnast Edition. Who wants some hot guys with bulging biceps in designer tank top shirts? If you do, you’re lucky because the editors of GQ Magazine are giving you exactly what you want — members of the United States’ gymnastics team modeling tank tops (or wifebeaters for you Brits).

The mag couldn’t have picked better models because, boy, them gymnasts with their bulging biceps and all are probably the hottest athletes in the sports world. Oh, and they are bouncy too. Swimmers like Ryan Lochte are also hot but, unlike gymnasts, they have no bounciness in them and we here at Famewatcher are all about bouncy men right now. 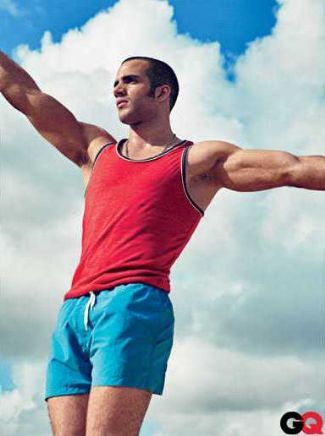 Danell Leyva, the guy who sent his nekkid pics to some random girl he met via the internet, poses like Jesus on the cross. Nice. Better than Tim Tebow.

What is Danell wearing? A tank top by Alternative and a pair of swim shorts from H&M. He’s the only American gymnast to medal in the London 2012 Olympics bagging the bronze in the individual all-around event.[Want to see more of this Cuban-American hottie? Check out our post about Danell Leyva in His Underwear. 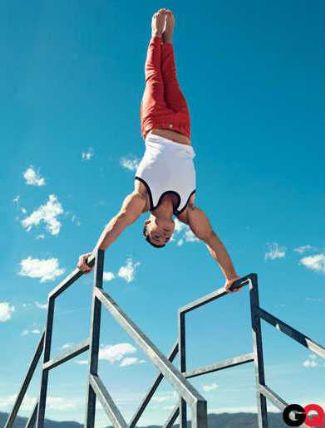 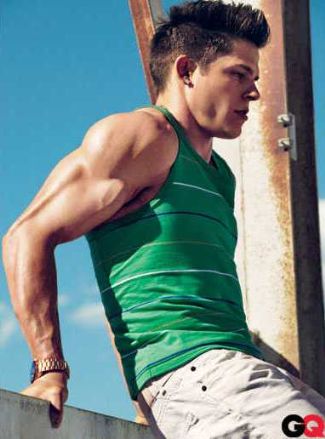 Texas jock Chris Brooks (horizontal bar) in Nautica shirt. Damn, look at them biceps. Can you feel the tension? We love, love, love it. 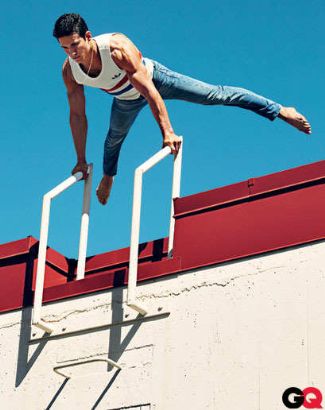 Pommel horse specialist Alex Nadour of Gilbert, Arizona flies like the wings of a helicopter while wearing an Adidas Originals athletic shirt. 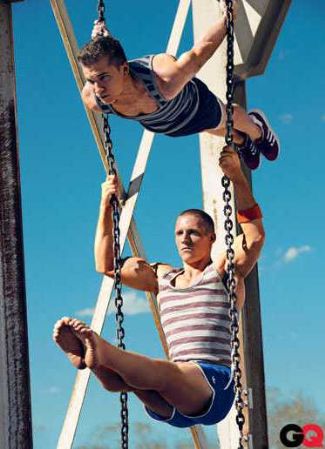 Jonathan Horton (horizontal bar, top) and Steven Legendre (floor and vault, bottom) shows us how you can escape from prison with the help of a thick metal chain. Joke. Joke. Jonathan is wearing a tank top shirt by Gap while Steven striped shirt is by Burkman Bros. It is worth noting that Jonathan has a silver medal from the 2008 Beijing Olympic Games for the horizontal bar event.

So which of the above designer athletic shirts is the most affordable and which is the most expensive. Well, the cheapest one is the Gap tank top shirt (on Jonathan Horton) which you can buy at US$17. The most expensive? Brandon Wynn’s Dolce and Gabbana which is priced at US$225. Ugh, that’s very expensive. No one in his right mind should spend money like that for a shirt with no sleeves even if it’s from freakin’ Dolce & Gabbana. Want more men in tank top shirts?