Shirtless Gymnast Hunks: Photos of 20 Male Gymnasts With No Shirts. Are you looking for hot male gymnasts? We blogged …

Who wants a photo of Danell Leyva in his tight boxer briefs underwear, raise your hand. Hey, why are we not surprised that a lot of you are raising your hand. Hehe. Good thing Danell himself is oh-so-liberal in giving out his underwear photos. It might get him in trouble though. 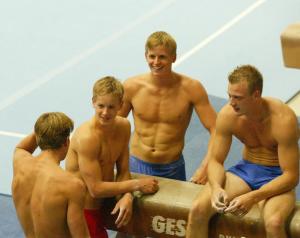 This post is for the Famewatchers among us who are fond of male gymnasts and blond guys and men in short shorts. That just about covers everything, right?

Holy canoly! Color us happy for this guy. Nearly three years after we blogged about him going to Hollywood, we now discover that he’s got an IMDB page which details the movies he’s appeared in. Sure he’s appearing mostly as a stunt double but these are big, big movies we are talking about like, hello, Captain America: First Avenger and Sherlock Holmes: Game of Shadows. Blockbuster, blockbuster, and blockbuster. Good for you, Mr. Damien Walters.

Here are the other movies where Damien did stunts: I Am Number Four, The Eagle, Scott Pilgrim vs. the World, Kick-Ass (assistant fight coordinator, stunt double: Aaron Johnson), Ninja Assassin, Hellboy II: The Golden Army.