Hot Italian Man of the Day. Resistance is futile when it comes to Italian male model and math lecturer Pietro Boselli. When he first came to the world’s attention after a photograph of him teaching in a university in London was shared and overshared on Facebook, our first reaction was, “Whooooo! Who says models are beautiful but brainless? Certainly not Pietro Boselli! We must write a post about him for our fellow Famewatchers!!!”

But then, all websites — from Time Magazine, to Huffington, to People Magazine, to Twitter, and Facebook — began singing praises to his physical gorgeousness and his non-average (aka superior) brain so we went like, “Ehhh. Everybody’s talking about him, let’s not blog about him like we are some mindless ‘bandwagonner'”.

A month later, we came across these photos of our Hot Italian Man of the Day and we went like, “Damn! That’s a fine piece! We really really must write a blog entry on him.” What can we say? We succumbed to his charms and pure Italian gorgeousness. Haha.

Pietro as the cover boy for the 2015 swimwear and underwear special of Attitude Magazine. Does he have the world’s best washboard abs or what? 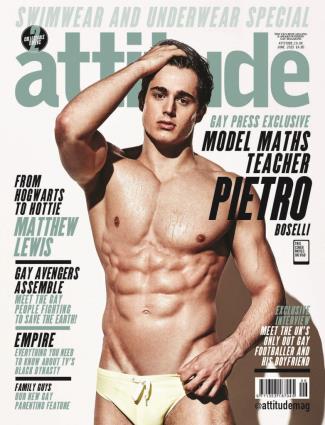 Apparently, he also did a Speedo photoshoot for an earlier issue of Attitude Magazine. However, at that time, the Attitude peeps did not know that our hot Italian man is much much more than a hot Speedo model. [Want more Italians hunks? Go check out our post on Christof Innerhofer.] 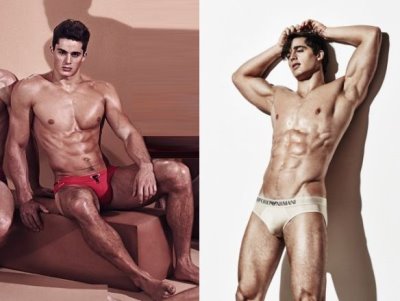 So what do you think of Pietro Boselli. He sure is blessed with good looks, no? Obviously, he’s also a brainy kind of guy because he’s a Math teacher and a PhD student. Whoever snags him in the future will be a lucky, lucky lady. Or, maybe it would be a lucky, lucky guy. Hehe.