Hot Guys in Leather Jacket: John Mayer, Singer With Style (updated from 27 October 2009). Cute singer John Mayer walks down the street of — well we don’t know where he is but doesn’t he look cute in his black leather jacket. Admittedly, we are not pleased with him at all for reportedly going back to that old hag Jennifer Aniston but people have done worst things in the name of love. Maybe he does love her, no? But we kinda suspect that this “John and Jen are back in each other’s arms” which you read in tabloids are being planted by Jen’s publicist. 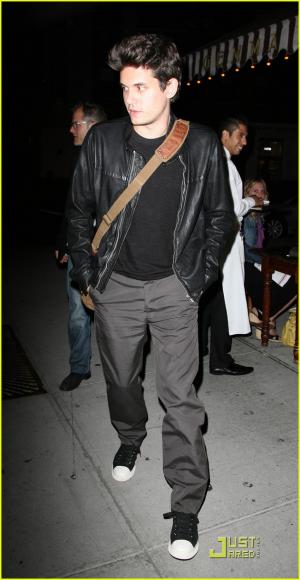 You gotta give credit to Jen, she is an overrated “actress” but she does have the best publicists in the world who work 24/7 to keep her in the headlines. But enough about the old hag, let’s go back to our boy John. Is your maternal instinct telling you to go get a comb to fix his unruly hair? Want more celebrity leather jackets? 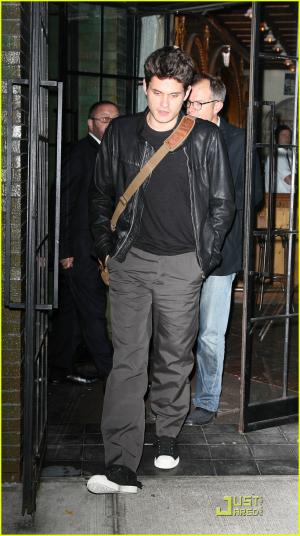 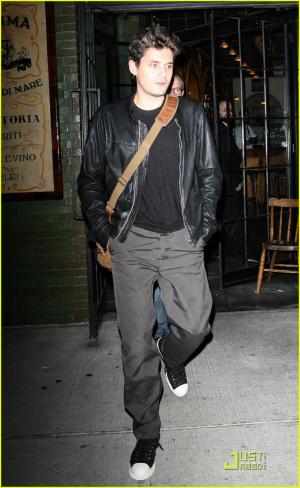 By the way, do you Mayer-watchers know that your idol is really into leather jackets? In 2009 interview with fabsugar.com, he revealed that his closet is full of leather jackets.

Says the Heartbreak Warfare singer: “I have a closet that’s like the greatest collection of leather jackets and Belstaff’s. I know everything down to the name of these jackets but I normally just throw on jeans and a t-shirt. I’m a big Rick Owens guy. Love Rick Owens.”

He loves him his Rick Owens, eh? No wonder our John was spotted wearing this Rick Owens Asymmetrical Leather Jacket. 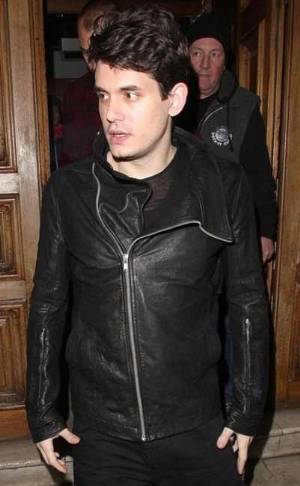 But despite his love for Rick Owens leather, John also likes other brands. In fact, he claims that he is not a wh*re label and advises us against buying clothes just because of their labels.

Quote from the stylish singer: “Every brand that at least has some solvency to have a store in NYC let’s say. Every single brand makes at least one garment that is worth owning. If you walk into a store because your friend wants to go into G-Star, no offense to G-star, look around and find the best G-star piece. Keep your eyes open. Don’t be a whore for labels. When it’s time, go into a store. Louis Vuitton makes one killer piece that looks nothing like Louis Vuitton every single year. Last year I bought this pair of racing pants. They are like the baggiest, coolest, cottony pants. They are billowy and have a tight hem. They are almost parachutey. Nothing like the LV design language. Everyone breaks design language one time per season. Find it, buy two of them.”

Hah. We never thought we’d see the day that John Mayer will be talking about fashion. We must say that he makes good points too. Maybe he’s a closet fashionista and his interview with fabsugar is his way of coming out.