Hot American Male Gymnasts. Do these guys remind you of the United Colors of Benetton ads featuring models from the different races? Them Benetton people might want to hire these American gymnasts since they truly represent the different shades of skin color that God (or evolution or nature) created. 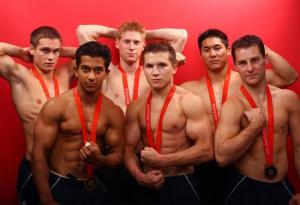 Oops, there’s actually no black dude in the team. To make up for that, maybe the Benetton people should ask British gymnast Louis Smith to join this group.

What about it Benetton peeps? It’s a good idea to feature these guys in your future United Colors of Benetton campaign, eh? [Update: For black gymnasts from the United States, the United Kingdom, and other parts of the world, go check out our post on Black Male Gymnasts.]

Anyhoo, let’s ID these shirtless hot American male gymnasts who celebrated their Olympic bronze medal at the 2008 Beijing Olympic Games by stripping off their shirts. We like!

Who are these guys? They are Alexander Artemev, Raj Bhavsar, Joseph Hagerty, Jonathan Horton, Justin Spring, and Kai Wen Tan.

Alexander Artemev traces his roots from Belarus (he was born in Minsk) but he migrated to the U.S. when he was nine and now lives in Colorado. Raj Bhavsar is from Houston, Texas but his parents are from India. Joseph Hagerty is from Albuquerque in New Mexico but, like all Americans, he has older roots someplace else [surnamedb.com says Hagerty is a good old Irish name].

Finally, Kai Wen Tan (anglicized as Kevin Tan) is from Fremont, California. He is of Chinese descent. His parents immigrated from Taiwan.