Highest Paid CEO in the US. Stephen Schwarzman, Chief Executive Officer (CEO) of the Blackstone Group investment firm, is the highest paid CEO in the United States. According to the Corporate Library, a group which monitors corporate governance on behalf of shareholders, Schwarzman received US$ 702.4 million in compensation last year.

Who decided to pay him that amount? Well, according to the Corporate Library, the entire compensation package “was decided not by a compensation committee but by Mr. Schwarzman himself.” Yup, that’s right. He decided how much he’s gonna get paid. Does that not violate the “conflict of interest” thingie?

Except for Schwarzman (investment), Ellison (software), and Jeffries (fashion), the top ten is dominated by CEOs from energy companies. By the way, you might want to compare this list with the list made by the Associated Press which puts Chesapeake’s McClendon at the top of the heap [see below].

Highest Paid CEO in the World: Aubrey McClendon (posted 02 May 2009). Mirror, mirror on the wall, who’s the highest paid of all? If by “who” you are referring to Chief Executive Officers (CEOs), then the highest paid of them all is Aubrey McClendon. This is according to the Associated Press which uses a “compensation formula, which adds up salary, perks, bonuses, preferential interest rates on pay set aside for later, and company estimates for the value of stock options and stock awards” to determine CEO pay. 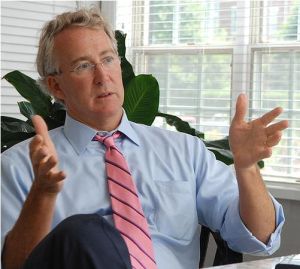 So what’s Aubrey’s secret which made him the highest paid CEO in the business world? Well, according to our imaginary source, Aubrey’s dirty little secret is that he keeps his hands busy as you can see in these pictures. Either that or he’s praising God all the time like an evangelical revivalist or something.