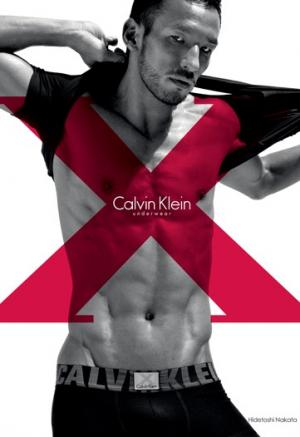 From wikipedia: “Outside of football Nakata has shown interest in fashion, attending runway shows, wearing designer clothing and sporting colorful haircuts. He dyed his hair red for the 1998 FIFA World Cup, hoping to attract the attention of European scouts, and Japanese hairstylist Aki Watanabe credits him as a trendsetter in hair styles.”

More from wiki: “Andrea Tenerani, photographer for GQ in Italy said of Nakata, ‘He’s perfect; he’s like a model. And he’s totally obsessed with fashion’, and Calvin Klein designer Italo Zucchelli said, ‘(Nakata) plays with fashion like all of them now, but in a cooler, more sophisticated way than many others’.” 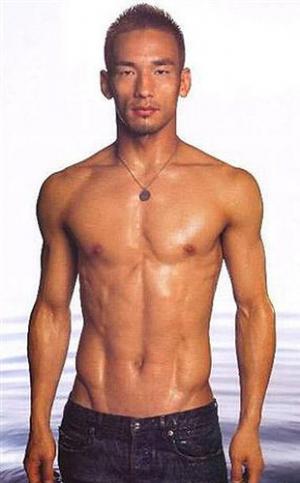 A wet, shirtless, muscled guy in jeans? What’s not to like? 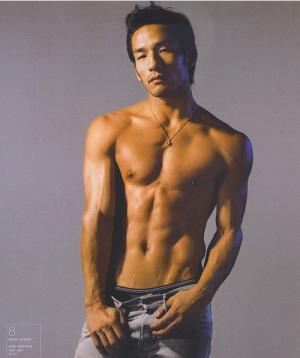 Hidetoshi Nakata Calvin Klein Underwear: The Video Version. Of course you want to see a video of our Japanese hunk in his Calvin Klein briefs, don’t you? Good thing we have it. He’s a sexy badass, isn’t he?

But, wait, there’s more. We also have a behind-the-scenes video for Hidetoshi’s photo and video shoot. We think you’ll find this more revealing in more ways than one.

The coolest part, for us anyway, is when we see him in lifting his bath robe while kicking a football which gives us a glimpse of his Calvin Klein X underwear. Also, that segment where he’s doing push-ups in his black CK boxer briefs is also … hmmm, what shall we call it…. delicious?

What about you? What’s your favorite segment in Hidetoshi’s Calvin Klein video-shoot?