Helg Sgarbi Gigolo Scandal. Remember Helg Sgarbi, the Swiss gigolo we blogged about earlier who tried to blackmail his lovers after entrapping them with his manly charms? Well, Helg is going to jail after he pleaded guilty to the charge of trying to blackmail BMW heiress Susanne Klatten.

It’s six years of jail time for our Helg. Maybe he can use his manly charms to protect himself from prison predators who are always looking for fresh faces, eh? 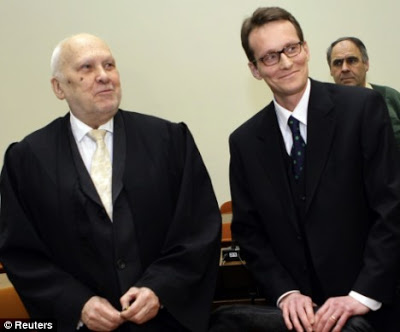 By the way, Helg is the one on the right in the photo above. We must say that we are underwhelmed by him. We thought he’d look like George Clooney or Brad Pitt but the person he reminds us of is Rachel “MSNBC It Girl” Maddow. Seriously.

Susanne Klatten vs Helg Sgarbi: Once They Were Lovers
6 December 2008

Someone should make a Hollywood movie out of this scandal. It has all the right elements which could make a potential blockbuster: a billionaire heiress, a gigolo, sex tapes, blackmail, betrayal, and a possible link to Adolf Hitler and the Nazis. From msn:

Heiress Susanne Klatten, whose $19 billion wealth makes her the third-richest woman in Europe, was allegedly blackmailed by her prostitute lover Helg Sgarbi and his accomplice, sect leader Ernano Barretta.

The duo threatened to send secretly filmed DVDs showing the married mother-of-three and Mr Sgarbi having sex to newspapers around the globe, Britain’s Telegraph newspaper reports.

Mrs Klatten — whose inherited wealth stems from chemicals giant Altana and a stake in BMW — forked out more than $14 million before going to the police.

Helg Sgarbi Gigolo Scandal Update: According to a 2014 report by Spiegel Online, our Swiss gigolo has served his time — 6 years, baby — and so he was released. More details from spiegel.de:

The Swiss Helg Sgarbi, who has become known as a gigolo blackmailer, is again at large. According to SPIEGEL information, Sgarbi left his cell in Munich on July 4th.
…
Sgarbi has now moved to Switzerland; His Frankfurt attorney Egon Geis said after a meeting in Zurich: “He has passed the prison term without prejudice.”

That’s it for now GigoloWatchers. We reckon this will be the last update for this page.