Harvey Levin Gay or Straight? Is Harvey Levin gay or straight? Huh, what kind of question is that? Have you been living under Osama Bin Laden’s cave? Harvey Levin is gay, gay, gay and he’s been out since, like, forever.

Okay, we don’t really know when he came out but Harvey is most definitely a member of the Friends of Kathy Club or FKC which includes famous gay celebrities like Andy Cohen, Anderson Cooper, Lance Bass, Neil Patrick Harris and Husband David Burtka, and many many more.

The TMZ big boss publicly came out in 2010 when he addressed the National Lesbian and Gay Journalists Association during a fundraising event.

Here’s part of his speech:

I’m thinking back a long time when I was starting out as a TV reporter at a local station in LA and I remember at the time – I was probably in my late 20s – and I remember this hell-like fear that if anybody in that newsroom found out that that I was gay, that it would be over. I built it up in my head. I was so terrified that somebody would find out.

I compartmentalized my life. Obviously friends knew I was gay but professionally I had to shut it out. And I believe, at the time, there was good cause for thinking I’d get fired. It got to a point where I was agoraphobic. My biggest joy was just never having to leave my house.

He then decided to let things go, kinda came out, and discovered the freeing nature of not hiding his gender identity.

More from his speech:

I think a lot of people build it up in their heads and they need people to see that it’s not a big deal. I think it’s important for people to see that you can survive and thrive and do well and prosper and there are no recriminations for the most part – although there are in some cases.

Still acknowledging that there are prejudices, that fact that what people build up in their heads is often way more than the reality than what it is. Even if the reality isn’t freedom from that kind of discrimination, the feeling that ‘Who cares?’ and that you can push it and challenge it is also really important.

Who is the Lucky Harvey Levin Gay Boyfriend? So now that we established the fact that Harvey is indeed a friend of Kathy, is he dating anyone? Does he have a boyfriend or partner or husband or lover or eff buddy or whatever it is people call the people they bang in bed these days?

Yes he does have a boyfriend. His name is Andy Mauer. Gawker’s Nick Denton blogged about Harvey and Andy sittin’ on a tree back in 2008: “Alec Baldwin, embarrassed by angry voicemails for his teenaged daughter that TMZ disseminated, outed Levin as gay last year. (Big deal: isn’t every single gossip mogul?) Levin with lives with his boyfriend, a chiropracter, Dr. Andy Mauer. Sounds respectable, and dull. Except, as Connie helpfully points out, Dr. Andy has another qualification: huge muscles which won him spreads in physique magazines such as Muscle & Fitness; and chiropracter is often just a fancy word for masseur.”

Six years later, the Harvey and Andy relationship is still going strong. In fact, they co-own their houses according to Realty Today: “Levin added his boyfriend, Andy Mauer’s name to the deed soon after he purchased the house. The gay couple also owns an 1,800 square feet beach-front condo in Marina Del Rey, California, which they purchased together in 2003.”

Harvey Levin Gay Boyfriend is Andy Mauer. Here’s a pic of the happy twosome coosome with a girl between them: 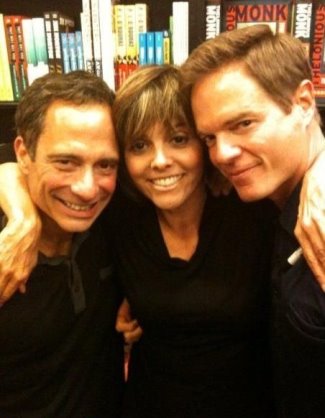 Oh wait, we actually published another pic of Harvey and Andy when we wrote a speculative post on who could be Andy Cohen’s boyfriend. Here’s said pic: 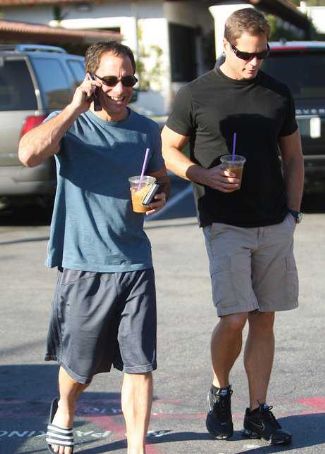 When will these two tie the knot? Will we be hearing wedding bells for Harvey Levin and Andy Mauer? We sure hope so! They sure look good together!

Update: Here’s what you, fellow Famewatchers, are saying about Harvey Levin Gay Boyfriend.

Richard Johnson: I think Harvey is very handsome guy, and if he has a boyfriend then more power to him. I know that if I had a chance I would date him. As long as there is the right chemistry is there and they both are very compatible, then who cares if they are dating. If marriage is down the road then that is between both of them. Building a solid foundation of love, trust, and honor is between both of them.That’s it for now fellow RelationshipWatchers!