Green Arrow Leather Jacket: Oliver Queen – Stephen Amell. Who made Stephen Amell’s leather jacket as Oliver Queen in The CW’s new show, Arrow? Is it made by the likes of Belstaff, Superdry, or Versace? How much does it cost for a fan to buy a similar jacket? 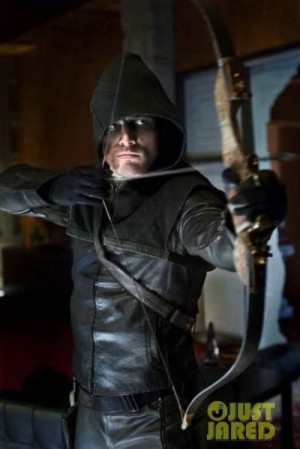 Well fellow leather-watchers, Oliver Queen’s costume is reportedly designed by Academy Award-winning costume designer Colleen Atwood. Aside from Arrow, she also did the costumes for movies such as The Tourist, Alice in Wonderland, and most recently Snow White and the Huntsman.

This means that you can’t but the outfit in any store although we won’t be surprised if some enterprising person makes replicas and sell them to fans. 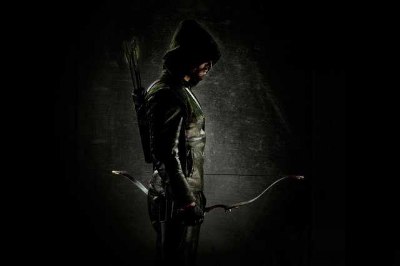 For the most part, the costume has received enthusiastic reviews from fans of the superhero (the most important demographic) but there are some guys who are not impressed. Their major complaint? The lack of the color green. “Where’s the green in Green Arrow? Like, you know, Justin Harley’s Green Arrow”, says our friend Eddie who has earned the right to be called a is a superfan of the millionaire superhero. 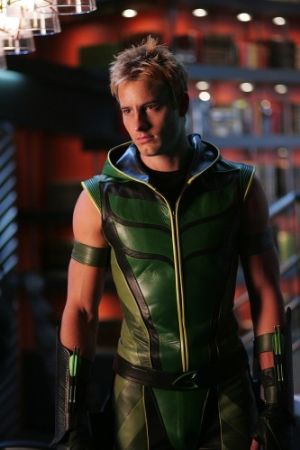 Indeed, Stephen’s costume looks more black than green. But, we must say though that it actually looks more badass — and more chic design-wise — than Justin Hartley’s costume above. In addition, Stephen’s outfit is not actually “greenless”; its just that the color green is darker and is kinda subtle. 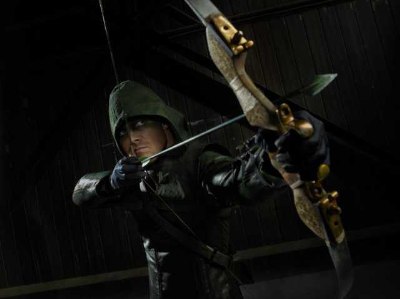 We actually think that the producers and the costume designers made the right call with regards this outfit. After all, if you are a bachelor millionaire turned superhero, would you want to wear an outfit that makes you look like a man/caterpillar hybrid? It might work for kids and tweens and teens but not for adults which is the main target demographic of The CW shows.

Stephen in a different leather outfit in this photo with a co-star who looks very much like 30 Rock’s Tracy Morgan. 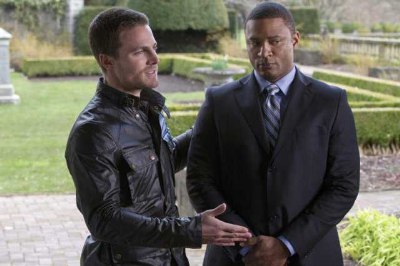