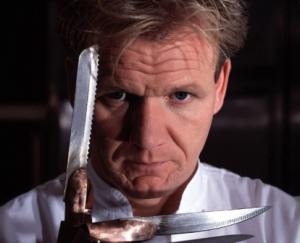 Why are we not surprised to learn that our favorite celebrity chef Gordon Ramsay, who’s been accused of serving non-fresh pre-packaged food in his restaurants [See Gordon Ramsay Serves Pre-Packaged Food] and of embellishing his football experience, has had cosmetic surgeries to enhance his looks? Well, it’s because he’s a friend of The Simon Cowell.

Apparently, Simon is some kind of ambassador for plastic or cosmetic surgeons because he’s been telling his fellow older celebrities to improve their looks by going under the knife. Like eager-to-please American Idol wannabes, these celebs are following what Simon says. Exhibit A: X-Factor judge Louis Walsh [See Louis Walsh Plastic Surgery] and now Exhibit B: Gordon Ramsay.

“My mother said they were smile lines and I could deal with that at 21, but not at 42. Simon Cowell suggested that now I am a success in America, I should do something, so I had filler put under the deep crevices and it hurt.”

According to RadarOnline, Ramsay now undergoes two to three procedures a year to maintain his smooth looks with the filler to plump out the creases costing up to $650 a time.

For more Gordon Ramsay, check out his watch in our post on Celebrities Who Wear Breitling Watches.

Wow. We’re so looking forward to the appearance of Felix Light in Gordon Ramsay’s Hell’s Kitchen. Mirror.co.uk is reporting that The Gordon is hiring The Little Gordon to appear on his show. Yay. From Mirror:

Gordon Ramsay has signed up a nine-year-old “mini me” to appear on his TV shows… after he saw the youngster’s hilarious impressions of him on the internet.

Ramsay snapped up Felix Light after seeing him scream at waiters, restaurant managers and dinnerladies in F-word rants – carefully bleeped out – in a spoof of his TV show, Kitchen Nightmares.

This guy deserves his own show.