Gordon Ramsay Serves Pre-Packaged Food in Own Bistros. First he was caught embellishing his football resume. Now, Gordon Ramsay is caught not practicing what he preaches — he advises restaurant owners to use fresh, locally sourced food but he uses pre-packaged food in his own restaurants. If that’s not hypocrisy, we don’t know what is. 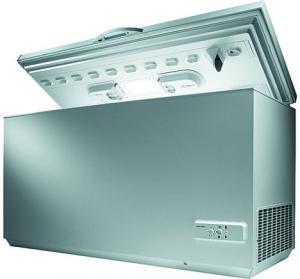 MB obviously disagrees with us: You don’t know what to talk about. Ramsay is no more a hypocrite than you are a respectable blogger.

Gordon does source everything possible locally. Nothing is ‘packaged.’ He *owns* three pubs and a diner in close proximity. He has a centralized prep kitchen that he also *owns* to handle the common menu items among them.

This prep kitchen maintains the same exacting standards for quality and local produce that he advocates for single-location restaurants.

Everything is made fresh daily as if it were prepped in the serving kitchen, except it happens in one place for all of the establishments and then moved. All kitchens spend the early part of the day ‘prepping’ food to heat up or cook (sauces, soups, etc.) and serve later to customers.

This isn’t ‘hypocrisy,’ this is economic efficiency. You owe Mr. Ramsay an apology.

Carla and Adam disagree with MB: As long as Chef Ramsey freezes his food. It isn’t fresh. And no one should pay the prices he charges.

What do you think, is Gordon serving pre-packaged food. If he is, is he being a hypocrite or is it simply “economic efficiency as MB argues?

Has celebrity chef Gordon Ramsay been embellishing his resume particularly his supposed experience as a football player?

From the NotW: “CHEATING chef Gordon Ramsay always relishes boasting about his glory days as a budding soccer star with Glasgow Rangers. But today the News of the World can reveal it’s a load of codswallop created to fuel his ruthless bid for stardom. For Ramsay NEVER ‘signed’ for the Glasgow giants and NEVER played first team games for them—despite saying so on radio, in his autobiography and in a series of interviews.”

The report adds: “In fact, he was such a liar fellow cooks nicknamed him “Billy Bull***t” —and he even secretly confessed to top chef Marco Pierre White that his Rangers career was boloney, adding: ‘But it just came out of my mouth and it was a good story at the time’.”

To clarify the matter, the tabloid interviewed Rangers historian Robert McElroy and this is what he says about Ramsay and his claims: “He was never a signed player for us and certainly didn’t play any first team games and wasn’t offered any sort of contract—it’s all complete and utter nonsense.”

Gordon Ramsay Serves Pre-Packaged Food in Own Bistros. Posted 19 May 2009.