Gisele Bundchen Plastic Surgery? Did supermodel Gisele Bundchen (aka Mrs. Tom Brady) undergo plastic surgery? Well, The Daily Mail alleges that she did. According to the British tabloid, the Brazilian beauty checked into a famous plastic surgery clinic with her younger sister Rafaela. The report states that Gisele and Rafaela disguised themselves as Muslim women wearing burqas to evade the paparazzi.

But what cosmetic surgery procedure did Gisele undergo exactly? Well, according to the New York Post, she had a boob job: “A source said she was concerned that her breasts had sagged after having two children — and the surgery was a 35th-birthday and post-retirement present to herself.”

Wait, whaaat??? We didn’t know Gisele retired? Apparently, she announced her retirement via Instagram last April. Here’s what she posted: “I am grateful that at 14, I was given the opportunity to start this journey. Today after 20 years in the industry, it is a privilege to be doing my last fashion show by choice and yet still be working in other facets of the business. #firstrunway #14yearsold.”

She also did an interview with a Brazilian publication and had this to add about her decision to retire: “I don’t see how to continue and stopping will leave room for other projects I have for myself. Automatically my body tells me if what I do is worth it, and it asked to stop. I respect my body, it’s a privilege to be able to stop.”

What other projects would she be doing in the future? For us here at Famewatcher, it would be cool to see Gisele be a guest host for America’s Next Top Model for at least one season/cycle. What about it Tyra? You should rest for one season and have Gisele host ANTM?

Anyhoo, where are the Gisele Bundchen plastic surgery before and after photos? Well, here you go!!! The pic on the left is Gisele before her breast enhancement surgery while the one on the right is the Brazilian beauty after her bob job. What a transformation, no? 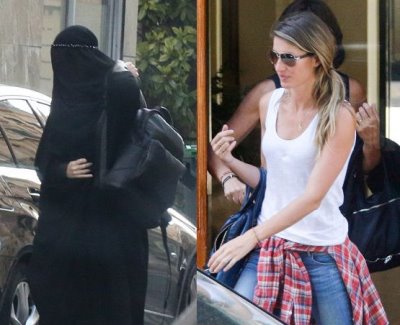 Hehe. Sorry, we are joking! The two photos were actually taken before the reported Gisele Bundchen plastic surgery. The pic on the left is allegedly Gisele going to the clinic to undergo surgery while the pic on the right is Gisele visiting the clinic a few weeks before.

So how did the papz know that the mysterious burqa-wearing woman is the Brazilian supermodel? Someone may have tipped them off but the dead giveaway is the fact that the woman was accompanied by the same bodyguard who accompanied Gisele when she made the earlier visit.

So she went through all that trouble dressing up as a very conservative Muslim woman but forgot to change her bodyguard or to, at least, ask him to disguise himself as someone else. You know, someone with a beard or something like that. 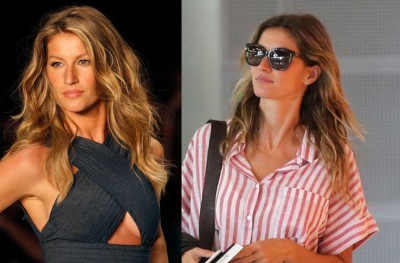 Hard to see any change because she’s wearing a loose shirt in the second pic. Question for you Famewatchers: Do you think she really needed the surgery?